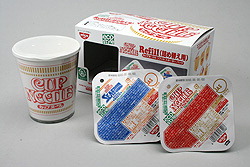 Nissin Food Products has announced a new “refillable” version of their world-famous Cup Noodles in March of this year. This new version of Nissin’s venerable product will have a plastic container instead of the traditional styrofoam cup, and was developed out of concerns for the environment.

The refillable Cup Noodles will be sold as a starter kit of a cup and 2 refills for 599 yen each (around $5), with additional refills, available in regular and seafood flavors, at 128 yen each (about a dollar).

A Nissin spokesman was quoted as hoping that this new product will appeal to environmentally conscious people, such as “the elderly and women”…hmm…interesting demographics.

If and when this product is available in the U.S., I’ll be there, fighting my way past the hoards of women and the elderly, I’m sure, to buy my very own cup and to save the world!