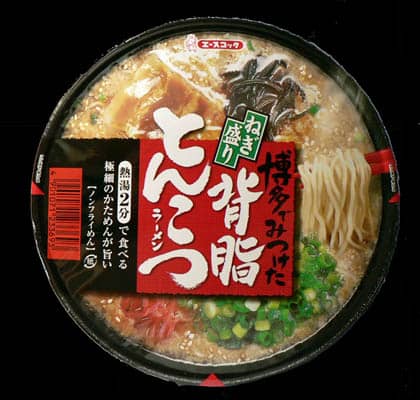 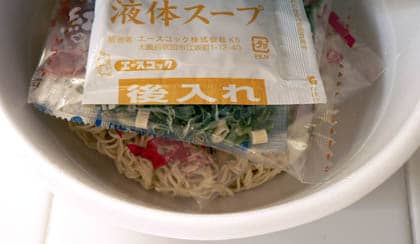 Wow! The first thing you’ll notice when you open the lid is how many packets of goodies there are. It was almost like a magic trick of never-ending flavor packets. There are FIVE packets of ingredients: there’s the obligatory soup powder (aka MSG), the liquid soup base, a packet of fresh ginger, one for onions, and finally, a packet of toppings. Toppings include very ordinary sesame seeds, somewhat special judas ear (fungus!), and a slice of pork.

The skinny tonkotsu noodles were just about perfect for instant ramen: chewy and flavorful. It soaked up the soup nicely and retained a rich pork flavor. The skimpy (sesame seeds, fungus, and ginger?! that’s it?!) toppings worked well together…well…except that I absolutely detest ginger, so I gave that to my wife (hi hon!). The pork was an unfortunate ultra-thin slice of…well, it was bacon-like, but then again, who eats boiled bacon? Luckily that the only thing that detracted from this ramen. Onwards to the soup!

The soup was the crowning achievement of this bowl ramen. It was amazingly good. I would say it’s as good if not better than some of the ramen houses I’ve been to! The tonkotsu soup was rich with a complex fatty pork flavor. Don’t get me wrong, it wasn’t heavy at all. It was almost strange that such a rich-tasting soup goes down so smoothly and light. And you know what? There was very little of the throat-piercing MSG aftertaste that usually lingers in your mouth for a while after eating these bowl noodles! I gotta say that this was the best bowl ramen soup I’ve ever had!

I really wanna give this a 9 because it was so good, but I really wish they could’ve put in a more substantial piece of pork. Just a bit of bamboo and/or seaweed would be nice too, but I’m being too picky. Should I give it an 8 or a 9…8 or 9…ah what the heck, seabura tonkotsu ramen gets a 9!