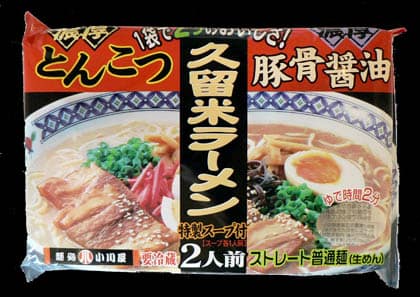 I have a bad habit of not really looking at or reading the packages of ramen that I eat until after I’ve eaten them. In this case, I was a bit surprised to open the package and see two different colored soup packets…was this some special “red/white song battle” (K?haku Uta Gassen) ramen? No, there’re actually two types of soup in this package! Cool! The white one is tonkotsu. The red one is tonkotsu shoyu. 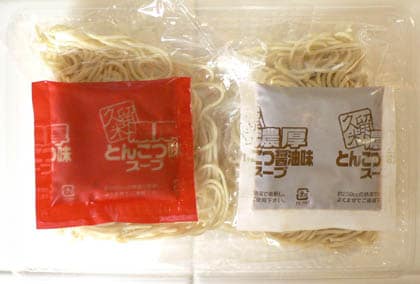 Yes, this is another Ogawaya ramen. And yes, the noodles are still good. This time around, they seem just a bit softer than the previous 3 Ogawaya ramen. I tried the red tonkotsu shoyu one first. The noodles pick up the soup flavors very well, and there’s a nice slippery sheen to them. The soup is strong but not heavy. The shoyu and tonkotsu flavors are well blended but was a bit too salty. The thick soup reminded me of the kind of soup you’d get at a decent ramen-ya and there was a hint of a garlicy aftertaste.
The white tonkotsu soup packet was understandably lighter than the red. The soup was milder without the stronger shoyu influence, but it seemed heavier. The absense of the shoyu probably allowed more of the natural pork bone flavor through. I actually liked this soup better, but somehow the noodles weren’t as satisfying this time around. Considering this was the 8th bowl of ramen I’ve had this week, was it noodle fatigue? I’m not sure, but I ended up enjoying both red and white ramen equally, for different reasons. Overall this double delight gets an 8!

Red (left) vs. White (right). Why does this picture remind me of a Star Trek episode?