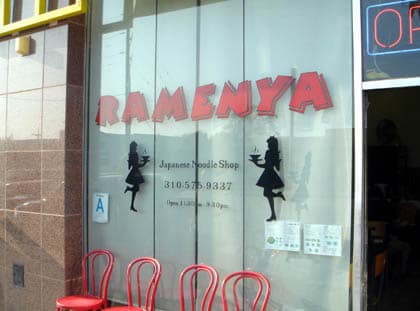 Despite the fact that it’s not actually on Sawtelle Blvd, Ramenya is a mainstay of the ramenya-filled area of West L.A. known as “Little Osaka”. The numerous ramenya in the area actually made for a tough decision on which one to review next, but the fact that a ramenya was called “Ramenya” tipped the scale in its favor…that, and the fact that this is probably the most times I’ll ever use the word “ramenya” in one paragraph. Known for generous portions, long lines, and a friendly staff, Ramenya seemed like the perfect place to go for lunch on a cold (yes, mid-60’s is cold for Southern California) winter day.


The small, unassuming storefront is next to a parking lot the size of a walk-in closet. Park on the street: you’ll save yourself a difficult u-turn out of the cramped lot.

The interior is plainly decorated, with a homey ambience. I felt like I was hanging out in someone’s garage-converted-into-a-kitchen or a 50’s style diner. The friendly waitress handed out the menus and served iced mugicha, iced barley tea that’s refreshing, but too reminiscent of “a glass of wheat,” according to some of my friends.

I was immediately alarmed when I saw the almost 30 types of ramen on the menu; the best ramenyas in Japan tend to specialize in a small variety of ramen. Some even offer only one and only one type of ramen. I’ve found that ramenyas that try to be all things to all people tend to be average at best. Even more alarming, some of the offerings were Chinese, Thai, and Korean noodle dishes, delicious in their own way, but plainly not ramen.

I ordered a bowl of shoyu ramen and a side of gyoza and hoped for the best. My order came quickly and was served piping hot. The sparse toppings matched the decor: nothing fancy, just bean sprouts, shinachiku, green onions, and a large, thick slice of chashu. The first sip of soup warmed me up, but left me unsatisfied. Unfortunately, it was one-dimensional: all shoyu and not much else. It was not much different from some of the nama ramen I’ve had. Granted, it was more like a good nama ramen than a bad one, but I expected more from such a popular ramenya. The toppings were undistinguished, and the al-dente noodles were just decent. I had hoped that the thick slice of pork would partially redeem the lackluster ramen, but it wasn’t meant to be. The chashu was a bit tough, dry, and not particularly flavorful. I would much rather have a thinner, tastier slice of pork any day. And the gyoza was also so-so, with too much cabbage, not enough meat, and not enough flavor.

If you’re just looking for a large, warm bowl of ramen, and a place to spend time with your friends, Ramenya is the place for you. But in the end, Ramenya is in a unique position to be the only ramen shop I’ve been to that truly lives up to its name: it’s a ramenya, that’s all. Just a ramenya.