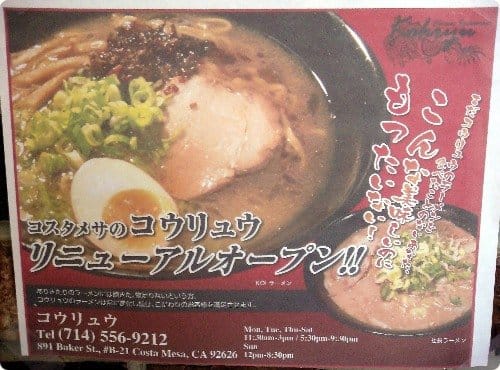 Kohryu Restaurant has gone through not only a change in ownership but a complete remodel since my last review. After their grand re-opening in January, I thought I’d give them another try. We arrived in time for a late lunch, hoping there’d be less people…wait, why are all these people huddled outside (it was really cold that day). We ended up waiting for 45 mins…45 mins!?! (Apparently, my idea of having a nice hot bowl of ramen on a windy cold day wasn’t quite as inspired as I hoped.) My expectations soared as my stomach growled even louder.

When we were finally seated, I was eager to order the special-order paiko ramen. Alas, not only do they not serve paiko ramen any more, but I didn’t even see paiko-don on the menu. Still determined to try something new, I ordered the “new” Koi (“love”) ramen. (Hmm…I dug out an old pre-ownership-change menu from over a year ago and noticed that Koi ramen is still there, under the “new” section.)

Though the Koi ramen is described as having “house special creamy soy sauce flavored soup,” (the Japanese description on the menu calls it “kotteri shoyu”) the soup looked more like a tonkotsu base. Toppings were minimal: green onions, the carmelized onion bits that Kohryu’s known for, chashu, and half a hanjuku egg. The egg noodles were flat and an almost bright yellow more suitable for a Cantonese noodle house than a ramenya. I slurped the noodles to get an impression. The noodles had a chewy al-dente texture, but were really reminiscent of pasta noodles. They soaked up enough of the broth to have a nice oily sheen, but tasted a bit out of place in a bowl of ramen. The fried onions still haven’t wormed their way into my heart; they’re a bit too dominant in taste and distracting from the rest of the ramen. The chashu was decent, and much thicker than what I’ve had at Kohryu in the past, but nothing extraordinary.

Don’t let the light color fool you: the kotteri soup is very rich. The soup was thick, and I’d venture to say that the “house special” part of the equation is tonkotsu. Overall, the tonkotsu-shoyu broth is good and ideal for people looking for heavier fare. People prefering a lighter asari ramen might want to stick with one of the other offerings.

The gyoza is average, very garlicky, and that’s about all the space I want to devote to it. The hanjuku egg, however, is deserving of it’s own section. I have to confess I don’t have a lot of experience with hanjuku eggs, but this is definitely the best in Southern California. The egg is lightly marinated, and Kohryu does a great job of soft boiling it so the yolk has an almost almond-jello like consistency. The texture of the egg white is equally delicate, and you get the feeling you could just swallow the whole piece without chewing. The hanjuku egg alone is good enough to bring me back.