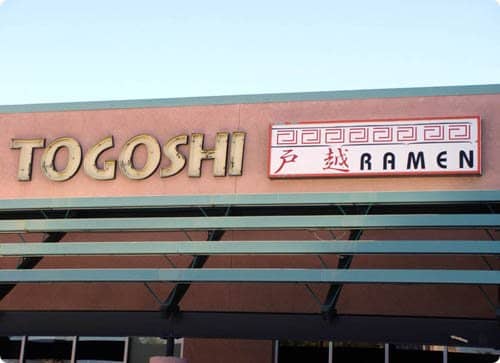 Off the Vegas Strip, away from the 99-cent shrimp cocktails, the iron chef restaurants, the all-you-can-eat buffets, things become a bit quieter and less boisterous. Drive a few miles away, and you’ll come across a quiet strip mall that could just as well be located in Anytown, USA. This is the kind of deserted strip mall that makes you feel like you might get mugged if you’re there after the sun goes down. In this unassuming strip mall, you’ll find an interesting mix of an Ethiopian restaurant, a kosher restaurant, a bagel shop (Harrie’s Baglemania…it’s damn good!), and–a ramenya?! Score! 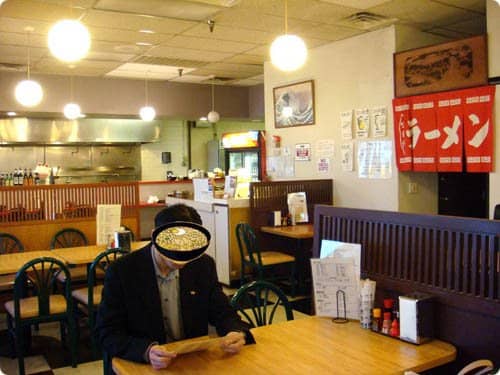 Togoshi Ramen was surprisingly large, with blank white walls covered with hand-made signs. I was pleased by the down-to-earth, homey atmosphere, the jpop playing in the background, and the fact that the signs were all in Japanese. What worried me a little was the fact that it was around noon, and we were the only people there.

I ordered a shoyu ramen, and the smallish bowl was quickly brought out by the friendly waitress. I quickly slurped the…soft…noodles. Darn, so the first impression wasn’t so great. I picked up a piece of the bamboo…the kind of bamboo that probably came from a can… How about the very plain-looking hard boiled egg? Ok, it’s a very plain, normal hard boiled egg. And bean sprouts are bean sprouts. What can I say?

I took a tentative sip of the broth and found it was too tangy and one-dimensional, like a mixture of vinegar, soy sauce, and chicken soup stock. Frankly, I’ve had better soup out of packages of nama ramen. The chashu was also average, a little bit on the lean side and not particular good nor particularly bad.

I really wanted to like Togoshi ramen. It’s the kind of place that makes you feel like you’re in Japan. Maybe the udon or donburi that they offer is better, but considering that “ramen” is a part of their name, it was a disappointment. Togoshi Ramen gets a 4.5 (a bonus .5 points for having the courage to open a ramenya in a Vegas strip mall, of all places).

Note: This review is really late. I visited Togoshi in January, and I’ve heard they’ve redecorated since then. Keizo’s more recent review also gives me the impression that Togoshi’s ramen might’ve improved as well. So if you decide to try it, please leave a comment and let me know what you think.