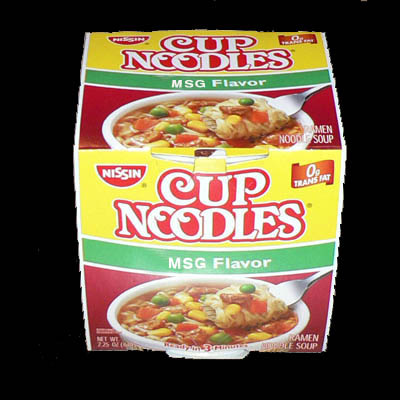 Ramenramenramen has learned that Nissin is introducing a limited edition Cup Noodles to select markets across the U.S. The new flavor, called simply “MSG flavor,” was created in response to the overwhelming popularity of MSG flavoring. “You have no idea how many letters we receive from ramen fans asking for ‘more MSG’,” said a spokesperson for Nissin. “Some of the more (ahem) extreme fans even questioned why we had so many flavors. ‘Don’t even bother diluting the MSG with beef, chicken, shrimp, or any of those other weird flavors. Just give us the good stuff!’ Being the kind of company that listens to our customers, we came up with Cup Noodles MSG flavor!”

Food technicians at Nissin have spent the last several weeks tweaking and perfecting the final product. Recent focus groups have given an unanimous thumbs-up to the new flavor. “I drank 5 gallons of water after I ate just one Cup Noodles MSG flavor!” exclaimed one food tester. Another tester burst with excitement, “I can’t feel my tongue, man! It’s like the soup…ate…my tongue! This is the best Cup Noodles flavor EVER!”

The new flavor will be available in stores on April 1st. If demand is as high as expected, Nissin is already prepared to fast-track a sequel, “DoubleShot MSG Flavor,” for release later this year.