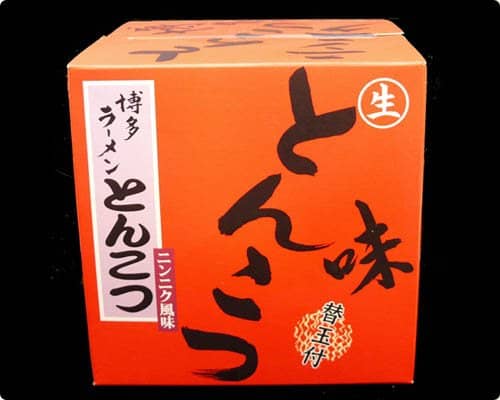 With packaging reminiscent of something out of a science fiction setting, this is one of the neatest forms of ramen packaging I’ve come across. Goramen’s Keizo was nice enough to share his spoils from the Yokohama Ramen Museum, and I expected quite a treat.

I spent some time opening the ramen cube and taking pictures. Hidden within two almost-secret compartments were two bags of noodles, myriad packs of toppings, and the biggest packet of soup base I’ve ever seen.

The tonkotsu soup base covered the bottom of my bowl, and had a light, fragrant pork smell. I cooked the first batch of noodles (the second batch is for kaedama, a second serving of noodles meant to be added to your leftover soup). The first sip of soup was satisfyingly hot. I had expected the soup to be much more flavorful because of the large dollop of soup base, but it was surprisingly light. It was oily and thick, but didn’t have a very strong tonkotsu flavor. It was good, but seemed a bit more generic than what I was expecting.

The toppings provided a good complement to the soup: lots of green onions, sesame seeds, and garlic chips. (Yes, you also saw a packet of beni shoga up above, but I don’t like ginger at all.) The garlic chips were extremely light and tasty, with just a hint of garlic flavor. These crunchy chips could be packaged by themselves and I would gladly eat them as a snack.

My first bite of noodles startled me: they were incredibly hard, like chewing on strips of hard rubber. I asked my wife to try a bite. “They’re like rubber bands,” she said. I dug the package out of the recycling bin and re-read the instructions. Did I cook the noodles long enough? Did I misread the instructions? No, the instructions clearly said 2 minutes. Hmm…I paused for a few minutes to let the noodles soften and soak up the soup. Unfortunately, that didn’t help. The noodles did have a nice flavor from soaking up the light tonkotsu soup, but the texture was barely softer. “That’s ok,” I thought to myself, “I still have the kaedama!” I happily cooked up the second batch of noodles, this time settling for 3 minutes.

Apparently, even 3 minutes wasn’t enough, and the second serving of noodles were still too hard for my taste. It looked like I was destined to not get along with this instant ramen. I sighed softly, and quietly gulped down the rest of the soup. With a just-decent soup and much-too-hard noodles, Hakata ramen tonkotsu gets a 6.

And now, more pics of the multi-dimensional ramen box. Is the inside is bigger than the outside?