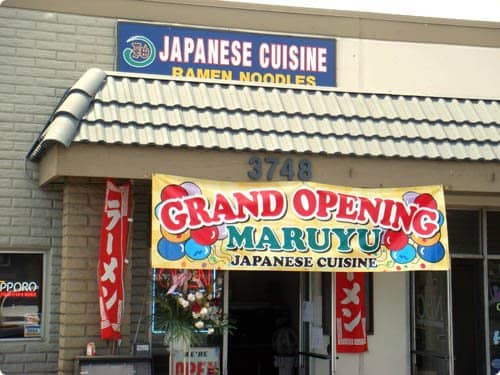 Located across from a power station and nestled in a tiny plaza with really only a Donut Star and a bunch of small businesses as neighbors, Ma Ru Yu is in the running for worst location for a new ramenya.

The restaurant is homey, with simple decorations and cutesy hand-made signs on the walls to announce special items not on the menu. There’s a great hole-in-the-wall vibe, yet the place is very clean. The two waitresses there were both very friendly and efficient. The menu touts that there are ingredients flown in fresh from Japan and that they don’t use MSG. Hmm…I actually like MSG…I ended up ordering a shoyu ramen and an order of gyoza and hoped for the best. The food took a while even though the place wasn’t very crowded.

I was underwhelmed by the way the ramen looked: really curly noodles that reminded me of instant ramen, half a marinated egg, some green onions, chashu, and a submerged piece of naruto. My obligatory first sip of soup changed my first impression real quick: the shoyu soup was good! The soup had a strong flavor with a robust fishy component. It’s different than the more pork and chicken oriented shoyu ramen that’s more prevalent around these parts. What’s even more surprising is how flavorful the broth was without any added MSG. On the other hand, some people might find it a bit salty. The noodles, though, didn’t impress me that much. The texture was a touch on the hard side of al dente, didn’t have much flavor and were a bit too flour-y for my taste. The hard-boiled egg had a typical hard-boiled texture…nothing to write home about, but — wow — did someone leave them in the marinade and forget about them? The egg was really too salty. I hope it was a fluke. And last, but not least, the small, thin slices of chashu were surprisingly tender. Though they weren’t quite melt-in-your-mouth tender, they were darn tasty.

I don’t usually pay close attention to what ramenyas charge for extra toppings, but Ma Ru Yu’s pricing is unusual enough for me to say a few words. Charging $1.50 for 3 slices of Chashu is a good deal in my book, but charging the same buck fifty for menma and a dollar for beni shoga seems a bit on the steep side in comparison. And no, none of their ramen comes with menma, an unusual decision. Of course, that just makes me more curious…is their menma special? Is it possibly worth the $1.50. Call me a sucker, but I think I’ve just talked myself into trying it next time.

Oh yes, the gyoza. The gyoza didn’t really stand out. They were decent and mildly garlicky and that’s all I have to report.

Though the owner has had lots of restaurant experience in Japan, Ma Ru Yu has only been open since April. There’s enough potential for greatness, and I wish them the best of luck. I have a special fondness for hole-in-the-walls like this, and I’ll definitely be back to see if things improve. Ma Ru Yu gets a 7.

(Yes, I know the big sign outside says “Maruyu,” but everything else they have says “Ma Ru Yu”)