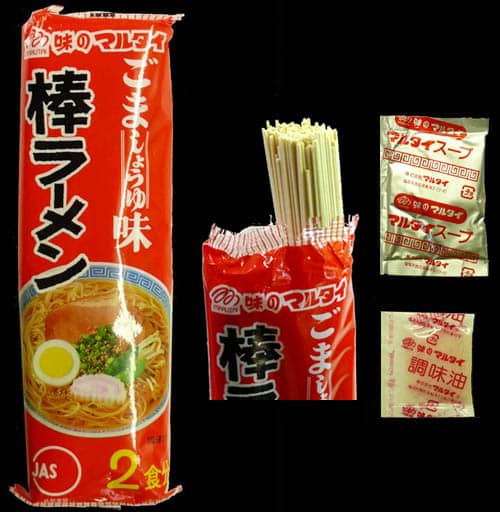 A few months ago, I tried and reviewed Marutai’s shoyu tonkotsu stick ramen. The next day, I tried this goma shoyu version. No, you didn’t wander into a time warp. This is simply laziness at work. On to the review!

Like the shoyu tonkotsu version, this stick ramen comes with a packet of soup base and a packet of seasoning and green onion bits. Again, the instructions call for 2-1/2 minutes cooking time. I thought I could outsmart the instructions by cooking the noodles for just 2 minutes, but I wasn’t very successful: these stick noodles were also soggy and not nearly al-dente enough.

The soup also wasn’t impressive. Unlike the shoyu tonotsu, which had a distinct sesame smell to the soup, the goma shoyu (that’s sesame shoyu) does not have a noticeable sesame smell. And while I pointed out that the shoyu tonkotsu version tasted like Chinese sesame noodles, the goma shoyu (again, that’s sesame shoyu) soup had a generic quality that basically reminded me of a light chicken soup. Notice I said “light chicken soup,” not “light sesame chicken soup.”

This brings me back to why I made a point of saying that I tried the two stick noodles back-to-back: I’m not crazy (you’ll have to take my word for it) and I didn’t mix up my notes. If I didn’t know any better, I would say that Marutai mislabeled the two different stick noodles. Though the goma shoyu doesn’t taste anything like shoyu tonkotsu ramen, the aforementioned shoyu tonkotsu sure tasted more like it should’ve been labeled goma shoyu, and one out of two is better than zero out of two. Confused yet? Don’t worry. Just know that this ramen isn’t very good. Marutai’s goma shoyu stick ramen gets a 4 out of 10. 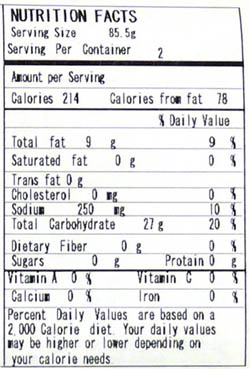