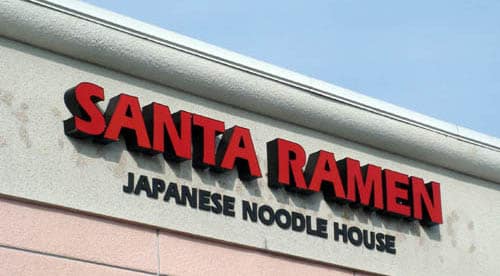 Among the unique logistical nightmares I face when traveling with a group of people is: 1. how do I trick–I mean convince everyone to eat ramen with me, and 2. how far out of the way can I coerce everyone into going for ramen? Recently, I was excited to be able to try another bay area ramenya. Santa Ramen was not my first choice, but between one ramenya being closed when we wanted to go (damn you Ramen Club!) and one ramenya being too out of the way for us (damn you Kahoo Ramen!), Santa Ramen was the next best compromise (yay Santa Ramen!).

We arrived at Santa Ramen a little bit after noon, and braced for a long wait. The line was almost out the door, but at least it moved pretty quickly. Be aware that, like some “true” ramen shops, Santa Ramen only serves ramen at lunch (sorry “D”!). There’s no fried rice. There’s no gyoza. There’s no curry anything. Santa Ramen serves only three different types of ramen: a shoyu-tonkotsu ramen, tonkotsu ramen, and a miso ramen. 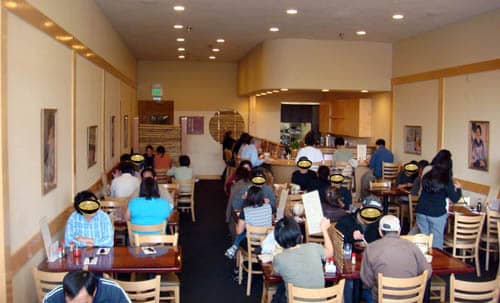 The ramen fates were with me that day and I was lucky enough to try all 3 styles of ramen. Everyone in our group just happened to want a different ramen, and I didn’t even have to do any fast talking. Yes! We ordered the ramen, some sides of hard-boiled eggs, some buta kakuni (stewed premium pork), and some white rice (again, sorry “D”!).

First, the sides. Unless you’re really really craving a hard-boiled egg, the hard-boiled egg is…well, a hard-boiled egg. Very hard-boiled. Very un-marinated. And very unanimously panned. The buta kakuni (made not just with any ol’ pork, but kurobuta), however, elicited mixed reviews. “N” thought the stewed pork was too lean, and not particularly exciting, while “K” gave it an F, calling it “the lean, non-fat, dry sweet stewed pork.” Whew. Tough crowd. I agree that the pork could’ve been a bit fattier, and it was a bit dry, but thought it was decent. The marinade obviously consisted of mirin and maybe not much else, but still…not too bad.

The different styles of ramen came with slightly different toppings to complement each soup. All the ramen come with negi and chashu, while the tonkotsu adds kikurage mushroom, the shoyu comes with menma and a piece of nori, and the miso has the same toppings as the shoyu, plus some bean sprouts to help balance out the natural sweetness of the miso. The menma was marinated, but not crunchy enough. The chashu also had mixed reviews. “N” thought the chashu was delicious and fatty. I thought that half of *one* of the chashu slices I managed to grab was better than average, but the other pieces were thin, too lean, and dry.

Tonkotsu ramen: Hakata style ramen should come with thin hard noodles. Unfortunately, these were not them. The generic noodles were a bit soft, but sufficed. The soup was smoooooth. And no, I didn’t accidently lean on the keyboard. Unfortunately, there’s not much more to add. The meek tonkotsu broth was smooth, creamy, and a bit light, but lacked any expressiveness. “K” was quite disappointed, calling it a D-level ramen, while “N” thought it was just a bit above average and “nice,” which I think is a perfect description for the soup.

Miso ramen: I tend to shy away from miso ramen, preferring the more aggressive shoyu base or the more complex tonkotsu, but Santa Ramen’s miso was quite good. The mildly sweet miso had a light spicy kick, giving it a good contrast that paired well with the rest of the ramen. This was “L”‘s choice, and she claimed it was “pretty good if a bit sweet,” and both “K” and “N” gave it a B rating (well, “K” gave it a B-. She’s a tough one.)

Shoyu ramen: I had a really good feeling about the shoyu as soon as I saw it: rich mounds of fatty goodness floated on the surface and clung to the noodles for dear life. The noodles were the same non-descript, soft noodles used in the tonkotsu and miso ramen, but the soup really was “pure kotteri heaven” and among the best ramen soups I’ve had in the U.S. I smiled as the shoyu and tonkotsu danced a delightful pas de deux around my tongue. The shoyu yin to tonkotsu’s yang (or is it the other way around?) was perfectly balanced and the soup was incredibly rich and flavorful (though the MSG-adverse should note that it does have a slightly noticeable MSG “tingle”). If you like your ramen broths full of flavor, this is the one to get. Everyone in the group agreed that this was the best of the three, and even “K” gave it an A-.

Overall, the forced visit (me forcing everyone else) to Santa Ramen was a success…well, except for “D,” who patiently waited for a fast food stop (come on, “D”!). They’ve moved to this location recently, so the interior is still spotless with “nice bathrooms” (Gee, “K”, that’s such a helpful comment for a ramen review!). Also worthy of mention, this is the only ramenya I can think of that has a minimum charge per person ($7.95 minimum, basically a bowl of ramen). Now if only they could improve on the noodles and the toppings…Santa Ramen gets a 6.5, but the shoyu ramen gets a 7.