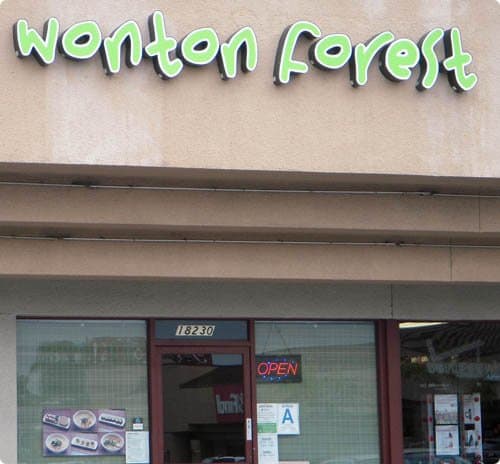 Ok, it’s not ramen, but if Keizo can review it, well, so can I! I’ve been wanting to try Wonton Forest after reading some rave reviews, and though my first love is ramen, I’m up for just about any type of noodle dish. Sure, some ramenyas serve wonton men, which is another wonderful Chinese/Japanese hybrid, but a wontonmen ?????? at a ramenya is quite different than a Chinese, actually Hong Kong style, wonton mien ??? (or wantan mee in Cantonese). A Japanese wontonmen is typically a shoyu ramen, complete with shoyu broth, ramen noodles, ramen toppings, and…wontons! Hong Kong style wonton noodle soup, on the other hand, has a lighter soup base that’s typically more of a chicken and fish stock, hard, thin egg noodles, wontons, of course, and is typically topped with Chinese broccoli or bok choy, and nothing else.

I ordered the Wonton Forest noodle soup, which comes with “pork and shrimp wontons served with choy sum, sliced pork, flavored egg, (and) topped with roasted garlic and green onions.” I looked around and admired the simple decor in the restaurant while waiting for my food. 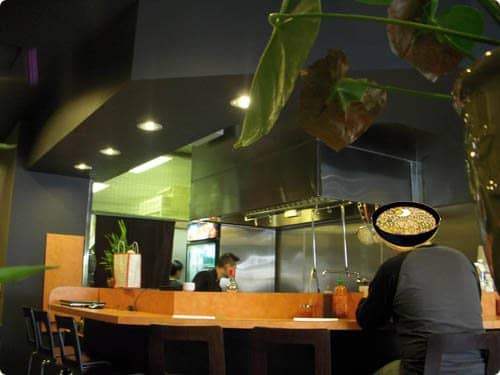 The noodles arrived promptly: a nice hot steaming bowl of wonton noodle soup on a cold cold day. The soup was very light, with a slightly strong fishiness to it. The fish flavor reminded me of Vietnamese fish sauce, and blended well with the wonton soup. Really, my first reaction to the soup was “wow! delicious!” Wonton Forest offers the option of making any noodle dish dry, without soup, and for an additional 50 cents. With soup this good, though, I don’t see the point. (Apparently, I’m an idiot, and I should have my wife proofread these. The noodles are “dry” but the soup is served on the side. This is a popular way to eat soup noodles in Chiu Chow ??, China…as is “chiu chow noodle soup,” which is on the menu. Sigh.)

The noodles were just a touch softer than what I’m used to with wonton men, but still very chewy and tasty. The flavored egg was decent and it seemed like the marinade consisted of soy sauce and nothing else. The thinly sliced chashu was tender if unremarkable, and really just plays a bit role. I just realized while writing this…I don’t think my wonton noodle soup was “topped with roasted garlic.” I don’t remember any noticeable garlic flavor, and I don’t see any garlic in my pictures. That said, I think I’m glad there was no garlic. I think the strong garlic flavor would be too strong a contrast to the light flavored soup.

Oh, did I leave out the wontons? At first, I thought I was going to get seperate pork and shrimp wontons. That is, I thought it would come with pork wontons, and shrimp wontons. I was a bit surprised that the wontons contained both shrimp and pork, but what a great surprise! These were some seriously great wontons! The proportion of shrimp to pork was perfect and flavorful. The minced onions and seasoning in the wontons played a superb supporting role, enhancing the overall flavor while staying in the background.

Good service, delicious food, and hep decor. If this web site was called wontonwontonwonton.com (hmm…), Wonton Forest would get an 8 out of 10.