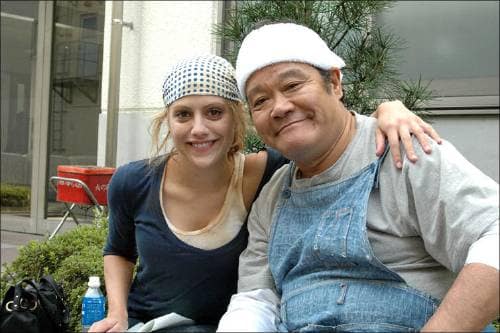 It’s about freaking time! After waiting for a long long time, and after literally months of fruitless enquiries to media 8 entertainment (a hearty “I hope your ramen is limp” to media 8!), I’m happy to report that the Ramen Girl will be out in Japan on Jan 17. The Ramen Girl (trailer here) is a movie about an American girl (Brittany Murphy) who is abandoned by her boyfriend in Japan. She ends up hanging out at a local ramen shop and eventually decides that she needs to become a ramen chef. The movie promises to show us “that each ramen bowl must contain a universe of feeling and truly be a gift from the heart.” Yeah…… To be fair though, I’ve rewatched the trailer a few times, and watched the Japanese trailer (it’s exactly the same as the English one), and I have to say that I’m at least a little more excited than ever to watch this movie.

Of course, that’s assuming it doesn’t dissolve into pure east meets west schmaltzyness. Then again, the casting of Toshiyuki Nishida as the “tyrannical, temperamental Japanese master chef” and Tsutomu Yamazaki as the “grandmaster” makes me less ambivalent (tip: click on the imdb link for Yamazaki-san and scroll down until you see a ramen movie you recognize. Yep, that’s him!).

One thing I have to take exception to is some of people (you know who you are!) calling this a “remake” of Tampopo. Of course, since I haven’t seen the Ramen Girl yet, I’m not really in a position to judge, but neither have the people comparing this to Tampopo. How in the world does this trailer make you think it’s similar to Tampopo besides having ramen as a main theme? I mean, is the Transformers a remake of say Herbie the Love Bug simply because both movies feature talking cars? Tampopo is so much more than just some movie about someone learning to make ramen, and this sort of “lump them all together” thinking just bothers me. End rant.

No word on when or if the movie will be coming stateside, though I have a feeling that a straight-to-DVD release is as much as we can hope for. For those of you who aren’t looking forward to seeing if Brittany Murphy can give this kind of movie the acting chops it deserves, I leave you with another, possibly more entertaining Japanese movie to look forward to:

Thanks and tips of the ramen bowl go to:
Keizo and Cutie for the heads up about the movie release date.
Brittany Murphy Media for the picture.
And Coilhouse for the High Kick Girl lowdown.

the proper way to eat ramen

15 thoughts on “finally, the Ramen Girl”