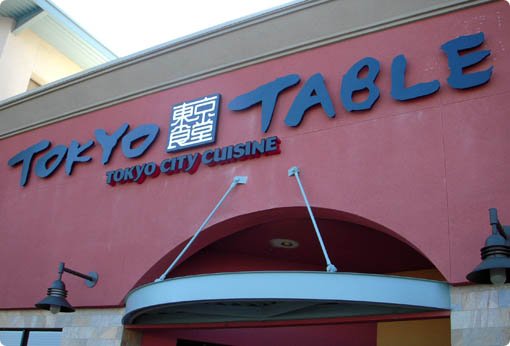 Tokyo Table is a fine dining restaurant that offers “modern yet authentic Japanese cuisine, complemented by tastes from other Asian and world cultures.” I have a tendency to look down on and avoid “fusion” type restaurants (more on this later) like Tokyo Table, whose signatures dishes include “sushi pizza” and “grilled pesto salmon.” I recently agreed to try Tokyo Table mainly because of my newfound enthusiasm for honey toast, a simple and delicious Japanese dessert also offered there. I was ambivalent about whether or not to try their ramen, due in part to Go Ramen’s less than lukewarm review, and in part because of the name of the ramen: Tokyo Char-siu Ramen Noodles. Call me picky, but “char-siu” is Chinese. “Chashu” is Japanese. And “Ramen Noodles” is redundant in the way that “ATM machine” is redundant. (An ATM is an Automated Teller Machine! Why would anyone say Automated Teller Machine machine?!? -end of rant.) To me, those are bad omens of things to come. Of course, dummy that I am, I still ordered the ramen. ­¤śē 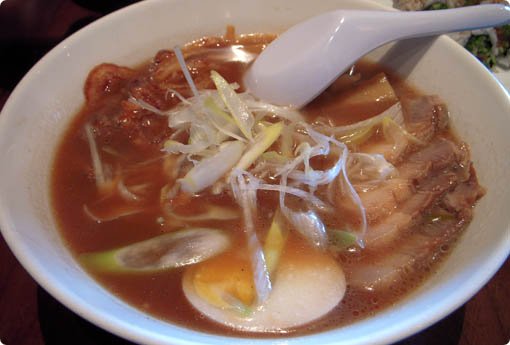 One well designed aspect of the Tokyo Table menu is that every item is pictured. The ramen on the menu looked pretty darn good, and guess what…so does the real thing! I eagerly took a sip of the “soy tonkotsu” broth…and it dashed my initial impression. The slightly-hotter-than-warm soup tasted like shoyu. Tonkotsu? What tonkotsu? The shoyu soup had an odd combination of being richer than the average shoyu broth, but not having much depth. It was as if a higher grade of dark shoyu was added to a middle-of-the-road nama ramen soup base. (For what it’s worth, though, my wife thought the soup was flavorful, bold, and oily.)

Moving on to the noodles. The skinny noodles were chewy, and starchy, and reminded me of Chinese egg noodles. I was disappointed, until I slurped a mouthful of noodles with the caramelized onions. Ok, that made it better. The onions added a tasty dimension to the noodles, but it couldn’t overcome the overly starchy texture and taste.

To be honest, I wasn’t sure whether or not the ramen would come with any toppings. The menu read “Braised tender natural pork slices served with ramen noodles in soy tonkotsu broth.” Then, on the following line: “Extra toppings: seasoned egg/sautķed vegetables/nori/pickled bamboo shoot/butter corn $1.50”, which made me wonder if all toppings were optional. When I ordered, I didn’t bother clarifying with the waitress, and decided to see what I would get. The ramen did come with toppings: half a seasoned egg, menma, spring onions, and the caramelized onions. Unfortunately, the toppings were also average: the egg was hard-boiled and only slightly marinated, the spring onions were, well, spring onions, and the menma was barely seasoned, with both crunchy and soft pieces.

It might sound like I was let down by the ramen. I was actually pleasantly surprised. Remember my bias for “fusion” and non-ramenya ramen. Right or wrong, I had really low expectations. However, I did have greater expectations for the chashu: the chashu had visibly large potions of fat on each slice. Seeing that may make some people a bit queasy, but when done right, that fatty portion can make the difference between decent chashu and a heavenly experience. I hesitantly gobbled an entire piece of chashu and let it rest on my tongue. The well-marinated fat slowly melted and blanketed my taste buds in porky goodness. The lean portion of the pork could’ve been more tender, but the overall flavor was great. It’s hard to find really good chashu in Southern California ramenyas, but this is definitely one of the better ones. 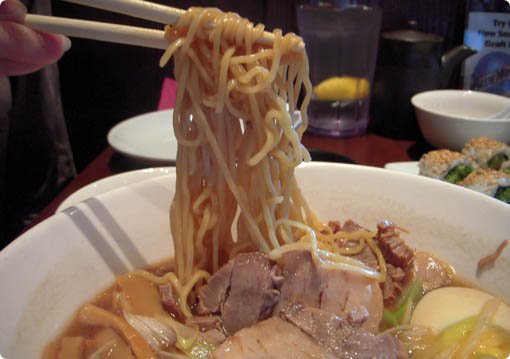 Most people probably wouldn’t go to a place like Tokyo Table for the ramen, and for the most part, I’l be satisfying my ramen fix elsewhere. However, for a non-ramenya, Tokyo Table delivers a decent if lackluster bowl of ramen that’s partially redeemed by the caramelized onions and the tasty chashu. It gets a slightly above average 6.5 out of 10.

(And no, I wasn’t able to try their honey toast! We ordered too much food! Argh!)

Most Americans know ramen only in the 5000-pack for a buck instant variety and as ŌĆ£starving college student food.ŌĆØ But ramen is so much more. Read more...