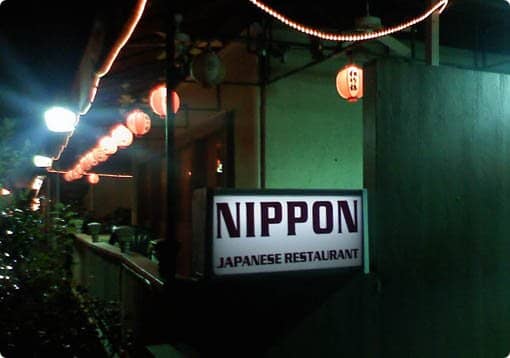 This is edjusted reporting to you from Dallas, Texas–wait, what? What do you mean there’s no ramen here? Nothing?! No, Tampopo doesn’t count. Seriously? No ramen? Sigh…ok, pack it up. We’ll just get some etuoffee at Pappadeaux instead…

This is edjusted reporting to you from Houston, Tex–what?! Again? No ramen?! Aw c’mon! These are two huge cities with so much good food! …a sushi restaurant? Well, that brisket sandwich for lunch was damn “goode “so I guess I can take one for the team…it’s called what? “Nippon Japanese restaurant”? You’re kidding? Isn’t that’s like calling your restaurant Korea Korean restaurant, Fran�aise French restaurant or Deutschland German restaurant! Alright alright, beggars can’t be choosers.

On a recent trip to Dallas and Houston, I was excited to check out the Texas ramen scene, only to find out that there wasn’t one. I’d heard good things about Nippon Japanese restaurant’s sushi, and since it was within walking distance of my hotel, I decided to give their ramen a try. (apologies for the poor picture quality. I had to use my cell phone because my camera battery died.)

Nippon is a cozy restaurant with a large outdoor patio area and a sushi bar inside. Supposedly they have both an English menu and a special “Japanese menu” with items not available on the English menu, but since I wasn’t after anything exotic, I didn’t bother to ask. The ramen is listed in the Udon & Soba section (uh oh) and is simply called “Japanese Ramen” in English, “ramen” in Japanese. I ordered the ramen with some sushi and was asked which ramen I wanted. “Um…the Japanese one?” I stammered, slightly confused. The friendly waitress told me I could order shoyu, miso, or tonkotsu ramen. She recommended the tonkotsu ramen and that’s what I ordered.

Nippon’s tonkotsu ramen comes topped with seaweed bits, moyashi, menma, a slight sprinkling of sesame seeds, half a hard boiled egg, chashu, and beni sh?ga. Breaking my usual “soup first” rule, I dove right in and slurped the noodles. The noodles were of the thicker variety, slightly soft without much taste, and tasted as if they came right out of a package of nama ramen. That’s not necessarily a bad thing: there are many good-to-great nama ramen noodles out there. But in this case, Nippon’s noodles were middling at best. I then sipped the soup, wondering what to expect. It was extremely light in flavor, without much of a pork flavor. It reminded me of chicken soup, except without the chicken. It was a decent, non-descript soup without any outstanding characteristics. It’s the kind of soup you could drink, enjoy, then immediately forget about.

There isn’t much to say about most of the toppings: the menma was crunchy and barely marinated, the egg was simply hard-boiled, and there’s too much you could do with moyashi, seaweed or red ginger. The (single piece of) chashu, though, was unexpected. The chashu was slightly fatty and extremely tender! The texture was very good, and it seemed like extra care was taken to making the chashu more than average. Unfortunately, the flavor was too sweet for my taste. It far from cloying, but a flavor of mirin and brown sugar stood out, distracting me from the actual pork flavor. Overall, the chashu has real potential and is leaps beyond what you would expected from a sushi restaurant ramen.

Most people don’t go to sushi restaurants to eat the ramen, but in a pinch, Nippon’s tonoktsu ramen does an adequate job. Frankly, you could get better noodles and soup in some nama ramen, but Nippon’s chashu redeems it somewhat. Stick with their sushi (their hamachi is quite good…the maguro, not so much), but if you just gotta have a bowl of ramen, you could do much worse. Nippon Japanese restaurant gets a 4.5 out of 10.