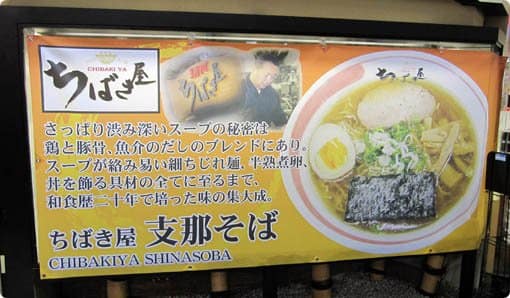 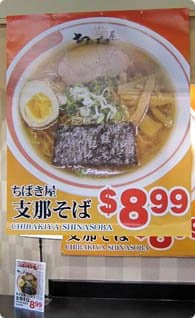 For a limited time (until tomorow), Chibakiya is at Mitsuwa supermarket again, this time at the Costa Mesa location. On the menu this weekend: their famous shinasoba!

The Costa Mesa Mitsuwa gets ridiculously crowded at lunchtime, especially when they have their food fairs. You have to prowl the dining area and be ready to pounce on tables when people leave. Luckily my wife was able to snag a table while I waited for the ramen. According to exile kiss, Chibakiya’s very own Chef Kenji Chiba, straight from Japan, was in the kitchen, preparing his signature ramen! I lurked around the Chibakiya stand, trying to get a picture of Chiba-san. I caught glimpses of Chef Chiba (the gentleman on the left, below), but was only able to get a picture of this gentlemen (in the green shirt on the right), who looked like he was supervising?

After a short wait, the ramen came out on a fancy-looking tray (did they bring their own trays?) and, unlike their neighbor (cough), also came with a proper, if disposable, renge (soup spoon, pictured above)!

The chicken-pork bone-fish-shoyu broth was hot and delicious. The chicken flavor stood out the most, but there was a nice depth to the soup and a strong pork after-note that sets it apart from more average shoyu broths. The slightly curly noodles were average, and on the soft side for my taste, but went well with the green onions and the soup. I was disappointed with the single slice of chashu though: the chashu had a thin but noticeable layer of fat and had a good texture, but was surprisingly bland. There was very little pork flavor and if it was marinated…maybe someone accidently put it in a bowl of water overnight instead of the marinade? It wasn’t horrible…it was just…oddly un-porklike.

I’ve had a craving for hanjuku eggs recently, and Chibakiya’s version didn’t let me down. Delicatedly marinated, egg white with the soft texture of jello, and an egg yolk with a consistency halfway between a liquid and a solid, the hanjuku egg hit the spot. Thinking back, I wish I would’ve gone back and tried to order a few side dishes of just the egg.

Chibakiya is serving their ramen until tomorrow, so you’d better hurry, or else you might have to wait another year before it comes around again! The shinasoba gets a 7 out of 10.