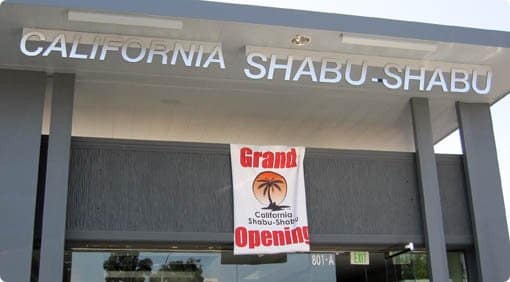 After months, and I mean months of dealing with just about every major problem that an aspiring restauranteur could face, my good buddy’s shabu-shabu dreams have finally come true. Yes, I said “my good buddy” and “shabu-shabu,” not ramen, so I’m going to go out of my way to be biased here. You’ve been warned! California Shabu-Shabu celebrated their grand opening last weekend, and today, the wife and I decided to pay an overdue visit.

For those of you who’ve never been exposed to the world of shabu-shabu, shabu-shabu is a Japanese hot pot. You start out with a boiling pot of water flavored with kombu, add in assorted veggies, and cook thin slices of meat, usually beef, in the water by swishing it around. Because the meat is sliced so thin, it cooks in the time it takes for you to say “shabu-shabu” (which translates to “swish-swish). Two types of dipping sauce are usually provided with shabu-shabu: a citrus-y ponzu sauce and a sesame-based sauce. Also something that can surprise the uninitiated: you cook your own food! 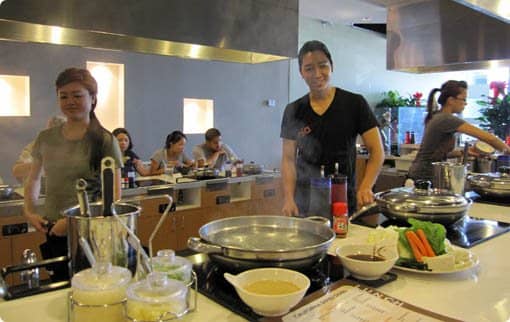 Actually, California Shabu-Shabu has been around for years in Fountain Valley, a few doors down from the Ebisu ramen house. Anyone who’s eaten there already knows the story: long lines of hungry shabu-shabu devotees eager for their next fix. This newly opened Costa Mesa location is over twice the size of the Fountain Valley location and decorated like a trendy hotspot. After Leonard, the co-owner, gave us the nickel tour (ok, so the bathrooms have cutesy little footprints by the stalls and toilets. Creative…no, really! But can we not hang out in the bathrooms and go eat instead?), we sat down and barked out our orders.

Today’s shabu meal centered around the prime beef. Call me picky, but years of eating at the Fountain Valley branch has conditioned me to spend a few extra dollars and order only their prime beef. It’s not that their regular beef isn’t good; the prime beef is just so much better. Marvelously marbled, decadently delicious, and tantalizingly tender, the prime beef melts in your mouth and is as rich, buttery, and flavorful as any good chashu. If prime beef isn’t prime enough for you, CSS (I’m going to call this place CSS for short from now on. The name is just too darn long!) also offers Kobe beef. We wanted to try the Kobe beef, but unfortunately they haven’t gotten their supply yet, dammit!

Dejected but not beaten, we opted to try their chicken and salmon. Frankly, I’ve never had any kind of shabu meat except for beef. I’d always thought that chicken shabu was for “those” kind of people…the people who, for whatever reason, do not or refuse to appreciate the goodness that is beef. I swished a piece of chicken, then swished it some more (salmonella, I banish you!), dipped it in my sauce, and expected to taste a dry, bland piece of white meat chicken. Instead, I was surprised that it was pretty darn good. It’s not prime beef by a long shot, but it was both tender and tasty.

While I was experimenting with the chicken, my partner in crime went ahead and tried the salmon. “Ooo! It’s so good! Try it! Try it!” Unsure of how long to cook salmon shabu-shabu, I swished it around for about 5 seconds and gave it a light ponzu bath. It’s official: from now on I’ll be ordering a prime beef/salmon combo. The salmon was delicious. Even cooked, it retained the same buttery richness as a fatty piece of salmon sashimi. Despite Leonard’s warning not to eat it raw, my wife apparently couldn’t resist temptation and (kids, don’t try this at home!) popped half a piece of raw salmon in her mouth. Shh…don’t tell the health department!

Yes, I am biased. Yes, I was already a fan of the Fountain Valley CSS. Yes, this is a blatant plug. And yes, shabu-shabu is probably not the first thing that comes to your mind when choosing a summertime meal. But if you’re looking for a “fresh, healthy, and fun” meal in a trendy yet friendly atmosphere, this is the place for you. Stop by, give it a try, and say “hi” to Leonard and his partner Ash. California Shabu Shabu gets a 9.5 out of 10 (a half point off for the wet rice. Sorry guys!)