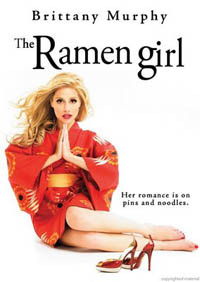 I’ve been meaning to review this movie for months now, and noticing the Ramen Girl sign on a “dvd play” box at a local supermarket reminded me how behind I am on my posts. 😛 I’ve had mixed feelings about watching the Ramen Girl since first day I heard about it. When I finally had a chance to watch it, though, I was actually excited.

The movie started out poorly, with the introduction of a pretty damn annoying American boyfriend character. In a way, though, that, and my previous low expectations, probably helped me enjoy the movie that much more. The script was both random and predictable: even though you know how the story will pan out, “WTF just happened” moments abound, and you really have to wonder why they even bothered to introduce certain characters. Speaking of characters, don’t even get me started on every American character in the movie. Besides Brittany Murphy, all the American characters are barely even two-dimensional, which wouldn’t be so bad if they weren’t just downright annoying.

But you know what? I liked the movie overall. The cinematography ranged from good to gorgeous, and most of the Japanese characters were more fully formed. Tampopo fans already know that Yamazaki Tsutomu (“Goro” from Tampopo) has a minor part (minor, yes, but he steals the show). Nishida Toshiyuki gives a solid performance as the “ramen chef with a secret.” But my favorite characters were the “two obaasan (old ladies) who never go home.” And Brittany Murphy? She wasn’t nearly as annoying as I thought she’d be. In fact, she even had a few good moments.

3 thoughts on “the ramen girl…no, really!”