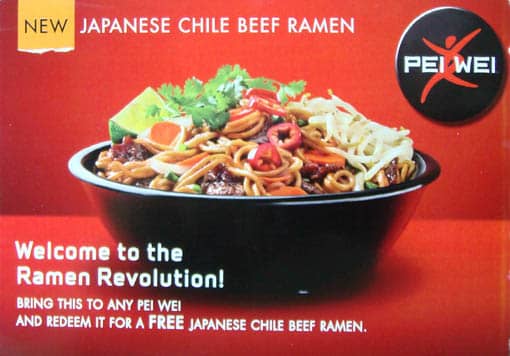 Pei Wei Asian Diner, the “pan-Asian cuisine” chain owned by P.F. Chang’s has been heavily pushing ramen for the past few weeks. They’re on a “mission to redeem Ramen’s good name as a noodle dish” and want to “upgrade” your ramen with their Japanese Chile Beef Ramen “hot from our wok.”

They had a “Great Ramen Exchange” during which you get a bowl of discounted ramen in exchange for a pack of store-bought instant ramen, which they then donate to the food bank along with a cash donation. Nice. That was on Sept 9th, though…

But for tomorrow: Hey- I thought you and your readers would be interested in some fun ramen things Pei Wei is doing. On September 14, Pei Wei is giving ramen-freaks the chance to create their own ramen recipe. You can submit your recipe on Pei Wei’s Facebook page and other fans will vote on their favorite. The winner will receive the ultimate ramen luxury experience for themselves and 9 friends which includes a dinner of ramen packed with Kobe beef, Tempura Lobster, Shiitake Mushrooms and Lotus Root. Now, let’s go back to that first paragraph. If you are a true ramen fanatic, a few choice words and phrases may bother you…like “Asian Diner,” “pan-Asian,” and “hot from our wok.” I’m not sure what ramenya’s they’ve been frequenting, but unless a ramenya serves other dishes, or offers sauteed veggies or something similar on their ramen, I usually don’t see any woks around. But at least they’re putting their money where their mouth is, and they’re offering a free bowl of ramen to the first 30,000 people who “sign” their petition on their facebook page.

I got my coupon in the mail just a few days later, and went in to try it. I’ve eaten at P.F. Chang’s before, but I’ve never been in a Pei Wei. The restaurant is nice, with a clean, simple decor, and high tech (!), from an animated LCD menu board to a fancy touch-screen drink dispenser. Neat! The cashier happily accepted my coupon and gave me a number.

As you can probably guess from the picture of the ramen on the coupon card, this ramen is soupless. It’s got slices of red chili peppers, beef, and carrots, some brown onions, a few small pieces of green onions, and it’s topped with moyashi, cilantro and a wedge of lime.

The “ramen” is cooked in a soy-mirin glaze, and everything has a slightly citrus-y (from the lime) mildly mirin-sweet taste that’s dominated by the chile sauce. It reminded me more of a Chinese/Thai hybrid than anything Japanese, especially with the cilantro. The noodles were soft and looked and tasted like spaghetti noodles. The beef was tender and delicious.

Overall, this was a good bowl of “Asian” noodles. Let’s face it: only a corporate marketing department would call this “ramen.” I sure wouldn’t. But kudos to Pei Wei for marketing this like crazy and making it fun. Let’s hope that this does bring more attention to real Japanese ramen somehow, and maybe they’ll come up with something in the future that’s a bit more…Japanese.