Most Vancouver ramen fans will probably agree that the top 3 ramenya are Benkei Ramen, Kintaro Ramen Noodle, and Motomachi Shokudo. There is no official Vancouver “ramen zone” or “ramen central,” but by concidence or by design, all three ramenya are located within a block of each other, near the corner of Robson and Denman Sts in Vancouver’s West End. (There’s even a Gyoza King a couple of blocks SE on Robson, which has an unspecified “ramen comma udon” on their menu.)

If you’re in Vancouver for the Olympics, Robson and Denman are a bit far from all the Olympic excitement happening on Howe, Granville, and Seymour, but even from the GE Ice Plaza/Robson Square, it only takes about a 30 min walk to satisfy your ramen craving. 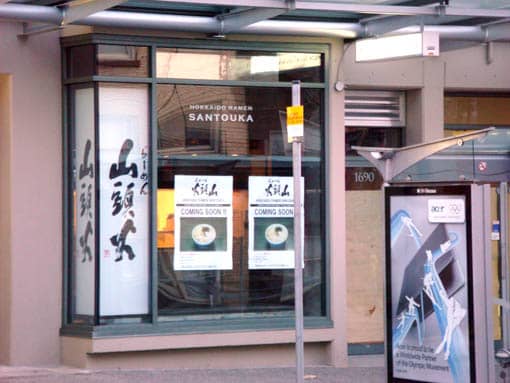 Yes, it looks like Santouka Ramen will be jumping into the fray with their first Vancouver location! Vancouverites will soon be able to judge for themselves whether or not this popular ramen chain is worthy of all the hype they seem to generate wherever they go. 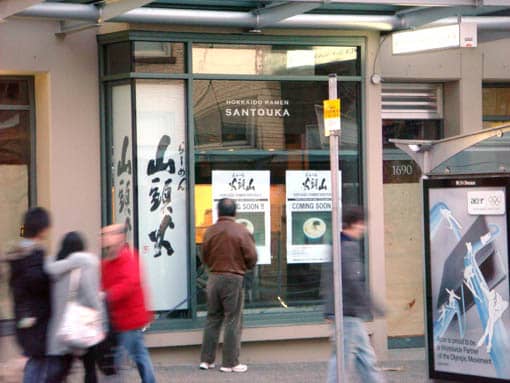 No word yet on when they’re going to be open, but it looks like they already have an interested customer looking in. I also couldn’t resist taking a peek. It doesn’t look like much is set up yet, so it might be a while before the Denman/Robson ramen central gets a 4th choice.