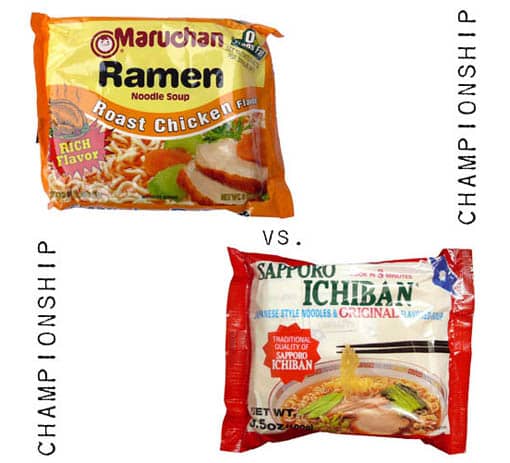 We’re down to the championship game. Sapporo Ichiban Original gets the tip off. Sapporo Ichiban Original plays deliberately and slowly. They like to set a slow-paced game with their subtler flavor. As before, their uniqueness lies in their blended taste. If you have to put a label to it, it would be something like miso-shoyu. Maruchan Roast Chicken, on the other hand, picks up the pace every time they have the ball. They are roast chicken without a doubt. But they announce this respectfully, without an “in-your-face” attitude. Some of the other schools try to be showy, and eagerly slam dunk when given half a chance. Maruchan Roast Chicken, though, plays steadily, like the disciplined team that they are.

Beyond the miso-shoyu of Sapporo Ichiban Original (SIO) and the roasted chicken of Maruchan’s namesake team (MRC), both teams bring supporting flavors. SIO has their onion and white pepper supporters, while MRC’s celery/herb flavor cheers loudly, next to a smaller spicy-black pepper cheering section. SIO also has a few scattered onion bits on the bench, but they usually don’t see much action.

By the fourth quarter, SIO’s rowdy MSG fans are starting to get a little out of hand. MRC also has some MSG fans on their side, but they’re more subdued and not as noticeable. By the last few minutes of the game, the two teams are even comparing noodles. Both teams have very similar tasting noodles, that’s to say, on the bland side. Both noodles are also similarly textured, but SIO’s noodles started off just a bit chewier and ended up just a touch softer.

It’s been an incredible run. Both SIO and MRC are strong competitors with very different approaches to the game. SIO’s tactics have been based on having varied flavors combined to become an “Original” flavor. MRC, on the other hand, focuses on being true to their name and presents itself as Roast Chicken…nothing more, nothing less. It’s close! The game ends with the final score:
Sapporo Ichiban Original: 6.0
Maruchan Roast Chicken: 6.5!

And Maruchan Roast Chicken is the champion!!! 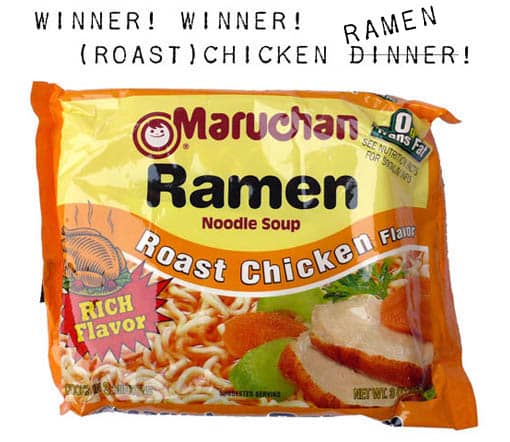 Feel like you walked into the middle of the tournament? Missing something? How did you get here? Start at the beginning!