It’s been a while since my last trip to New York. It’s been so long that instead of having to go to Ippudo, New York again, Ippudo came to Costa Mesa. So how did the Costa Mesa experience compare to “the real deal” in the Big Apple? 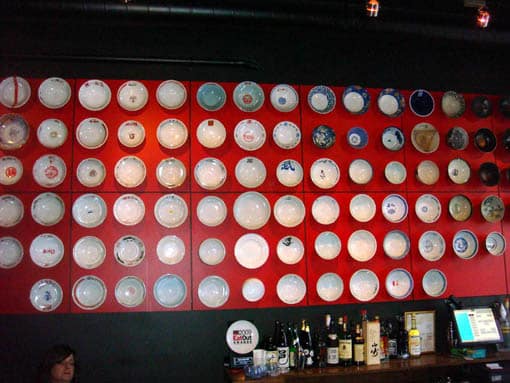 My first impression of Ippudo’s NY location was that it was really inconspicuous. There’s a small sign with their Japanese name ??? and a much smaller, almost invisible sign in English. The night-club/trendy restaurant-inspired interior is dark and intimate. Large, communal tables take up most of the space, and there’s a line of brightly lit booths along the side, decorated in a present-meets-past way that gives you the feel of being in some modern Egyptian restaurant that just happens to serve ramen. It must be the hiragana-as-hieroglyphs running along the wall.

After a few minutes’ wait, I was seated in the back corner at one of the communal tables. While Ippudo is famous for their Akamaru Shin-aji, “Ramen King” Shigemi Kawaharas modernized version of hakata ramen, I decided to start with the basics, and try the Shiromaru Hakata Classic, described on the menu as “the original tonkotsu.” A quick chat with the friendly waitress lead me to order a side order of chashu. (There is nothing on the menu to indicate that the side order of chashu is different than the chashu that comes with the ramen.)

I’ve often complained about the lukewarm soup at several local ramen shops, and I was pleasantly surprised by Ippudo’s declaration that their ramen “is served extra hot, so please use caution when indulging in our signature dish.” The ramen comes with a nice assortment of toppings: chashu made from Berkshire pork, kikurage, beni shōga, menma, sesame seeds, scallions, and 1/2 of a hard boiled egg. Let me get my biggest gripe out of the way first: really? A hardboiled egg? Seriously. A $13 bowl of ramen comes with a non-marinated, plain hard-boiled egg half?

Boring hard-boiled egg aside, everything else worked well together. The toppings meshed with the noodles and soup. The noodles, made fresh in the basement, were ultra thin, hard, and a bit floury. They paired well with the soup, and the texture was a great contrast to the thick soup. And the soup…the soup! Deliciously rich, the soup was almost gelatin-like and had such a smooth taste. It was, at the same time, full of pork flavors, yet not too “pork-y.”

The chashu deserves its own paragraph. The thin chashu that comes with the ramen is decent. Wait, that’s it? Just “decent”? That deserves a full paragraph? Let me explain. The chashu that comes with the ramen is slightly fatty, well-marinated, and yes, decent. The chashu was flavorful, but somewhat on the dry and hard side. But the real star is the side order of chashu you can order. The side order chashu, by comparison, is fantastic! This chashu has more fat, which combines with the lean meat to create a luscious experience in your mouth. Not only is it fatty, but it’s packed with flavor. It doesn’t so much melt in your mouth as it lingers and dances a seductive dance on your tongue. Anyone who goes to Ippudo must, and I mean must shell out the few extra dollars to order the side chashu.

Ippudo was a real treat, even though I ended paying around $20 total for a bowl of ramen. At Ippudo, it’s not just about the ramen, but about the experience of eating at a legendary ramenya: it’s a pilgrimage any self-respecting ramen fan in New York should make.

Ippudo’s Shiromaru Hakata Classic gets a 7.5 with regular chashu, 8.5 with the side chashu.

(A quick apology here for the photos. Except for a few random areas around the booths and at one table, it is really dark in here. I had to read the menu by candlelight and I could barely see what I was eating.)