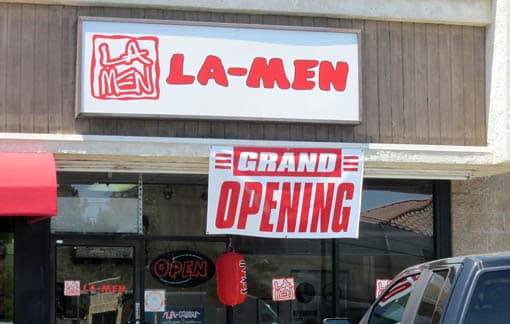 I noticed La-men springing into existence maybe a month or two ago on the way to a friend’s house. At first, my first instinct was to make fun of it. “La-men! Ha! They can’t even spell it right!” But later, when I found out it was actually run by Japanese people, I was intrigued. My friend told me that he heard it was decent, “but do you really want to go there instead of Gomen?” Gomen, my favorite ramenya in the area, called out to me from just a few minutes away. But duty calls! 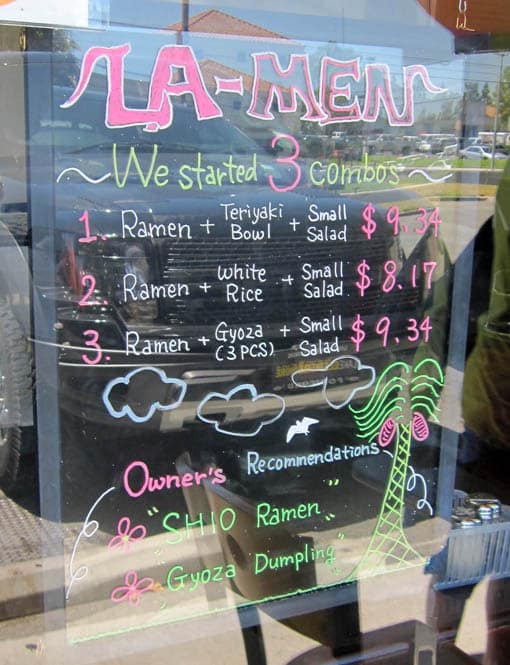 La-men is located in a tiny strip mall near a 7-11. The menu doesn’t have a lot of items, which I count as a plus. There’re a few types of ramen, some rice bowls, and gyoza (more on the gyoza later). I wanted fried rice, but no such luck. I opted for combo #3 with shoyu ramen.

Here’s the salad. You get your choice of citrus-shoyu dressing or some other dressing. It was lightly flavored and pretty good. blah blah blah…it’s a salad.

When I saw down and looked at the condiments, I regretted not ordering the shio ramen. Not only was there a container of basil flakes, its label encouraged “try me on shio ramen.” Really?! Basil flakes on shio ramen?!

Ok, here’s the problem with the “gyoza.” They were exactly as pictured above and on the menu. When ordering the combo, the lady behind the counter shyly admitted “yeah, they’re not “real” gyoza,” then added “they’re in gravy.” But you know what? They were pretty good. The gravy was light and tasty and went well with the wontons–I mean, gyoza. The gyoza tasted exactly like wontons with gyoza filling…meaty, and garlicky like some other gyoza I’ve had. Even the gyoza skin was doughy like a wonton or Chinese dumpling.

And finally, the shoyu ramen. It looked pretty good. The egg was obviously hard-boiled, but marinated. The pork looked decent. Lots of onions, that’s good. And sesame seeds in a shoyu ramen. Ok, that can work…

…But wait…there seems to be something odd-looking in the soup, next to the egg…

Whoa! Hello, bamboo shoot! That’s something I’ve never seen in a ramen before. A large, marinated bamboo shoot. It was crunchy, but too shoyu-y. If it was marinated less, it would’ve been delicious. Definitely a surprise! So how was the rest of the ramen? The noodles were great! Sure they were mass-produced curly factory noodles, but they were cooked perfectly and had the right amount of chew. And that was the highlight of the ramen. The soup was decent but dull, with just a hint of a slight molasses-like sweetness at the end. The egg was as expected: a good, marinated, hard-boiled egg. The pork showed some promise. While the chashu was lean, it wasn’t tough, and one piece had just enough fat to tease me with an extra burst of flavor.

La-men is one of those little hole-in-the-walls that I’ll likely check out from time to time, just to see if they’ve gotten better. The portions are good (the bowl above is actually a “small”), the cashier is friendly, and you can fill up on free iced tea. The shoyu ramen gets a just-above-average 6.