I left Tsujita Ramen on Saturday kicking myself for not having tried the ramen. That night, while catching up on Facebook messages and blogs, I realized what a mistake I made. Egged on by rameniac and Go Ramen’s thumbs up, I managed to make a trip back during early dinner hours on Sunday, when the long lines and crowd died down. 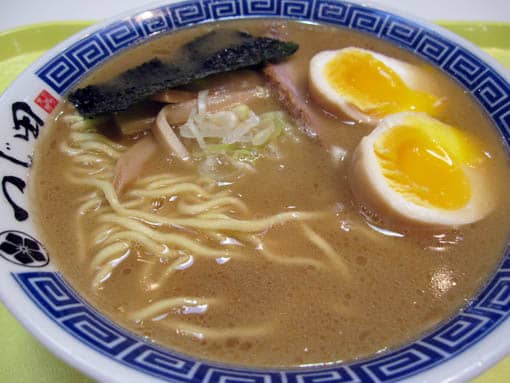 As I mentioned in an earlier post, Tsujita’s Costa Mesa appearance features their famous tsukemen, but they’re also offering their gyokai (seafood) ramen. Their gyokai ramen comes with basic toppings: a handful of green onions, menma, nori, and a large slice of chashu. (The delicious-looking hanjuku egg is extra.)

I had high hopes for this ramen, and it sure didn’t disappoint. My first sip of the fish and pork bone broth was eye-opening. It was satisfyingly hot (temperature-wise) and rich. If you’ve tried their tsukemen, imagine that this is its skinnier fisherman cousin that lives on a boat…maybe with a small pot-bellied pig as a pet…fishing all day long (the cousin, that is, not the pig…uh, nevermind). The tonkotsu part of the soup is mild and mellow and a deep, almost overwhelming sardine-bonito flavor leaps right in after it. The soup leaves a lingering smoky fish flavor that you’ll savor.

The medium-thick straight noodles were toothy and tasty and was a perfect companion to the kotteri soup. The menma blended right in to join the chorus of flavors, and even the soaked nori was delicious. The pork was the only slight disappointment. It was more tender and fattier than the pieces of chashu that came with the tsukemen but still doesn’t compare with some of the better chashu I’ve had. Still, it doesn’t do anything to detract from the ramen.

Aww, is the egg crying because I’ve ignored it so far? There there now… I still wish the egg was slightly more marinated, but leaving it well rested in the soup both warmed it up and gave it a nice oily fish and tonkotsu flavor coating. It was just a hair more cooked than the one I had before, but still delightful.

Since the food court was so empty, I had the opportunity to meet and chat with Tsujita-san’s brother, who apologized that Tsujita-san, the owner, wasn’t there. The good news? He was busy in L.A. preparing for their first permanent U.S. location! Check this space mid-next year for further developments!

The Nidaime Tsujita gyokai ramen gets a praise-worthy 8.5 and I’ll be doing everything I can to go back before they’re gone.