I’ve previewed Daikokuya when they first soft-opened but have never formally reviewed it. Since it’s been so long and a few things have changed, I decided to start the new year right with another visit to this popular and expanding ramen chain.

First, a few small changes: the fancy restaurant pager is gone, replaced by the technologically advanced “we’ll yell your number when your order’s ready” system. Nothing wrong with that. However, they’ve also replaced the real renges (soup spoons) with tiny disposable spoons, which all serious ramen shops should just ban, plain and simple. Also, they now offer Kichi-ramen, a spicy & sour version of their classic Daikokuya ramen. On my most recent weekend visit, I stuck to the Daikokuya Ramen, kotteri style. 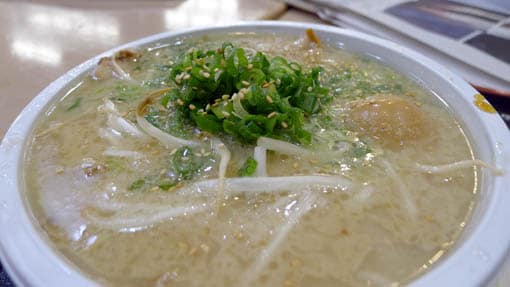 A quick refresher course on Daikokuya’s namesake ramen: it’s a tonkotsu-shoyu ramen with curly egg noodles and a smattering of toppings. They proudly proclaim the use of kurobuta (black pig) pork for their soup and chashu and their eggs are marinated overnight in a “special sauce.”

Though I’ve been to Daikokuya Costa Mesa many times since their opening, I’ve never sat down and compared how they are now to how they were when they opened.

The good: Their soup has definitely improved since the frustratingly muted soup I had when they first opened, and for those of you who like your ramen broth heavy, you can’t go wrong ordering the ramen Kotteri, which “uses added soup extractor (sic) from the back fat.” Compared to the lukewarm soup I had almost 2 years ago, the ramen I had this weekend had piping hot soup and the noodles were the same satisfyingly al-dente curly noodles.

The bad: The marinated egg, which on my first visit was soooo close to being a hanjuku egg, is now simply a hard boiled egg. While the yolk is completely solid, the egg white is still soft and tender and the marinade is tasty, so it’s not a complete loss.

The ugly: The chashu slices have gotten noticeably thinner, and the batch I had this weekend was wildly inconsistent. One piece had a decent fat-to-lean ratio but the lean part was a bit on the dry side. Another very fatty slice was slightly undercooked, which resulted in the fatty half being slightly chewy instead of melt-in-your-mouth tasty.

I really like Daikokuya ramen. The soup, especially the kotteri version, is good to great, and the noodles are great. The accompanying toppings, egg, and chashu is usually at least decent. Daikokuya Costa Mesa’s biggest problem has been with consistency, and if they could just make a few small improvements, and do it consistently, they could easily become one of the top ramen shops in Orange County.

Ganbatte, Daikokuya! You get a 7 out of 10 but you could do better.