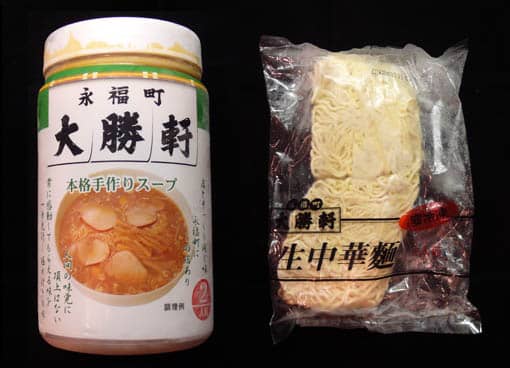 Those of you who follow Go Ramen! know that Keizo, the writer of Go Ramen! has been in Japan, living his dream of becoming a ramen chef. A couple of months ago, I got a message from Keizo telling me that he was back in CA visiting, and had something for little ol’ me!

Imagine my surprise when Keizo went through all the trouble of bringing me the best souvenir ever: a jar of frozen ramen! The ramen is from Eifukucho Taishouken 永福町 大勝軒, a popular ramenya in Tokyo that’s been around for decades. This was the first time I’d ever seen frozen ramen in a jar, and I was eager to try it!

Actually, the noodles themselves were in a separate pouch. The jar contains the soup as well as menma, and look! Chashu! Preparing the soup was simple: heat up some water in a large pot, then put the entire jar in the water until it’s warmed up. 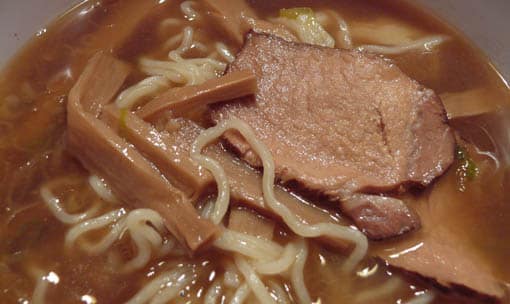 When I opened the bottle, a rich, fishy smell greeted me, beckoning me, tantalizing me. The soup had a mellow shoyu-bonito flavor with a tangy aftertaste. There was also a touch of char-ness to the soup that gave it a nice edge. The oily, thick soup was delicious and coated the chewy noodles completely. The menma was soft and tasty. The thin chashu was lean and dry, but hey, there’s chashu in the ramen jar! This was one of the best soups I’ve had in a nama ramen and I was ecstatic that there were two servings in the jar. Eifukuchou Taishouken’s “ramen in a jar” gets an 8 out of 10.

Keizo, thank you (and your mom) from the bottom of my heart. One of these days I’ll finally come visit you at Bassanova and I’ll buy you a beer and ramen or dozen!

Bonus time: You can also try this ramen! It’s a bit pricy, but it’s available on the Eifukuchou Taishouken web store.