One of the first things you’ll notice when you at Ikemen is the posters proclaiming their mantra: “No Ramen, No Life.” Owned by Shigetoshi “Sean” Nakamura, also known as one of the “Four Ramen Devas” in Japan, Ikemen is no run-of-the-mill ramen shop. I’ve been looking forward this for months after rameniac broke the news of its opening.

The second thing you’ll notice is the time-warping jazz club vibe. Why are the staff wearing fedoras? What year is this? Where exactly am I? What am I in for? 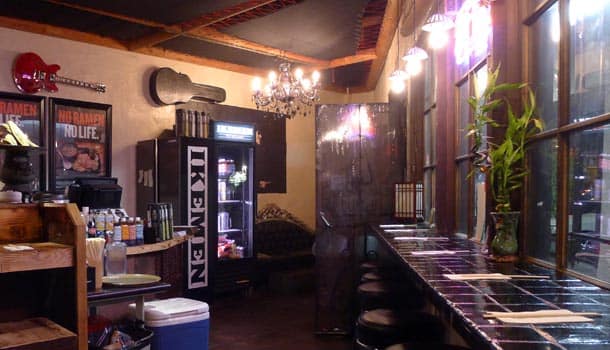 Ikemen specializes in tsukemen, or “dip ramen,” a ramen with the noodles, toppings, and soup served separately. The noodles are meant to be dipped in the “soup,” which is really more of a sauce…a soup concentrate. Of course, being a Sean Nakamura production, there are plenty of unique selections, from the more traditional Ikemen Dip, to the Johnny Dip (with tomatoes and Italian Basil), to the new Ghost Buster Dip (roasted marshmallows?!? In a tsukemen dip?!?). I picked the popular Zebra Dip, with an Onsen Tamago (literally “hot springs egg”) topping, and a mushroom umami-slider.

First, a quick word about the slider. It’s a “bun” pattered after the gua bao, a Taiwanese “burger” that’s becoming in the U.S. And yes, that’s an “Ikemen” brand on the bun. Chef and General Manager Takashi Adachi personally served the slider, apologizing that the mushrooms are slippery and are hard to keep inside the bun. That should give you some idea of how seriously they take their food here. But it didn’t matter to me that I had to pick up a few loose mushrooms with chopsticks. The mushroom slider was still delicious, with succulently sauteed mushrooms and a light and tangy miso(?)-vinaigrette sauce.

The “Zebra” Dip, which I’m sure gets its name from the dark stripes of “Zebra Garlic Seasoning” floating on top of the Tonkotsu “Au Jus”, was just…wow. It was an explosion of umami-savoriness with a good deal of roasted garlic flavor surrounding it. I let the chewy almost-udon-like thick noodles soak in the sauce to get the full effect and almost regretted not ordering “Genuine Ramen” (that is, noodles in soup). I practically drank–no, I did end up drinking the the leftover dip when my noodles disappeared in a flurry of slurps. You can ask for some hot water to be added to the dip to finish it as a soup. Me, I enjoyed it enough to down it as-is. My cardiologist may not approve, but my tastebuds sure did. On the slight downside, the chashu, while tasty, had texture reminiscent of ham, and wasn’t as good as I’d hoped. The blowtorch-charred edges enhanced the flavor, though, and you can always dip it in the Dip for an extra burst of flavor.

As you might guess from its name, an onsen tamago originated as an egg cooked in a hot spring. Since hot springs (the ones you can soak in, anyway) are hot, but not boiling hot, the temperature effectively slow-cooks the egg until the egg white has an ethereally delicate texture. Ikemen’s tamago was so good that I ordered a second serving, which lead to a revelation. I had trouble scooping my first egg off the plate in one piece, and ended up almost licking up the remains like a hungry dog. The second onsen tamago was served in its own small dish. Bidden by my wife (the unsung hero of this dinner) to “just eat the whole thing,” I picked up the dish, tilted it to my mouth, and slurped down the egg in one gulp as if it were a raw oyster. And the lightly sea-salt dusted egg had such a delicate and ocean-y taste that it did remind me of eating a raw oyster. So the revelation? Ask to have your egg in a separate container. You won’t be sorry. The next time I’m at Ikemen, I’m going to be tempted to just order 10 of these and call it a night.

One last tip about Ikemen. If you’re a L.A. regular, you don’t need a reminder that parking is atrocious. You might want to look for street parking in the residential neighborhoods behind Ikemen’s plaza. Ikemen is worth the drive, even from Orange County, and I’m already dying to go back and try everything else. The Zebra Dip with onsen tamago gets a 9 out of 10!