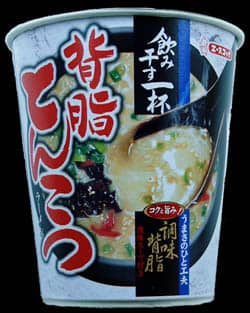 The wife is away, so let there be ramen! It seems like I can’t go wrong with instant tonkotsu ramen, so I was eager to try this cup ramen. The ramen comes with a few bits of seaweed, a sprinkling of sesame seeds, plenty of green onions, and a few pieces of pickled ginger to balance out the flavor. Since it’s a tonkotsu ramen, it has the typical thin, hard noodles that are nice and chewy. The noodles held the thick broth well but were mostly adequate. The soup smelled great! Unfortunately, it was a bit of a letdown. The tonkotsu broth starts off with a rich, thick flavor. After a few more slurps, though, it becomes a bit one-dimensional, and very MSG-y. There isn’t much of a full-bodied porkiness to the soup, and after a while, the MSG starts to beat mercilessly on your taste buds. It’s not as bad as it sounds, but you’ll probably be really thirsty afterwards. There are much better tonkotsu bowl/cup ramen out there, and the small portion doesn’t help either, unless you’re just looking for a light snack. This cup ramen gets a decent 6. 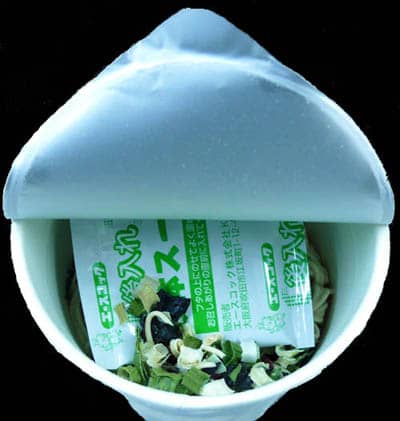