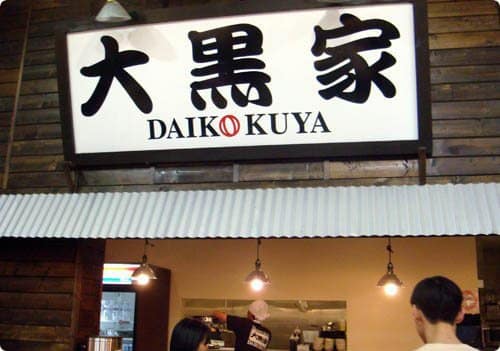 Rumor had it that Daikokuya was opening in “the OC” in the beginning of March. I happily went there two weeks ago only to find a Daikokuya sign and an empty store. Darn. Finally, after asking around, I found out that the official grand opening was set for “some time in April” (this was from two different Daikokuya employees, but neither could give me a firm date) and that the owner was currently in Japan buying decorations. The good news though? The location is already up and running and open for business!

The ramen shop does look a bit unfinished, with no real signage or posters; there’s only a little hand-written blackboard menu on the counter. The only items on the menu (so far?) are the Daikokuya ramen, a shredded pork bowl (a rice bowl with shredded pork), and the gyoza.

I was handed a restaurant pager (those flat ashtray-sized pagers that fancy restaurants hand out) after I ordered. About 5 minutes later, the fancy-restaurant pager buzzed and flashed. Even though the shop didn’t seem quite ready for the grand opening yet, was the ramen ready for prime time?

The noodles were al dente and very chewy. The creamy tonkotsu soup clung to the noodles and imparted a nice pork flavor. Green onion fans will love all the negi that blankets the ramen. As much as I love negi, I wished there were fewer onions, as they can be a bit overpowering. The shinachiku was good, and a bit limp. The bean sprouts added a nice crunchy texture to the ramen, but also toned down the overall flavor.

The soup was good, and frustratingly light. You can taste the complexity and the richness of the tonkotsu soup, and it’s even thick enough to cling to the side of the bowl, but it’s too muted. Imagine listening to a great band, only they’re playing in the other room and the sound is dampened. You can hear how good they are, but the music is just not quite loud enough to be satisfying. That’s how this soup makes me feel. The moderately warm temperature of the soup didn’t help either.

The two large and thick pieces of kurobuta pork also looked and smelled promising, but fell somewhat short. The very tasty pork teasingly falls apart when you pick it up, but it’s not as tender as it could be. The specially marinated egg, however, was an unusual delight. I’m not sure if I should compare it to a hanjuku egg, since it’s not quite the same. The egg white is delicately soft, with a slightly caramel flavor. It’s faintly salty and lightly sweet at the same time, and the yolk is jello-like in consistency. Visually, I loved the way the yolk glows in the light, as if it were a giant, edible gem.

Any new restaurant needs a bit of time to develop, and I think they might need a bit of time to work out some kinks. But even now, during it’s pre-grand opening, Daikokuya is a welcome addition to the OC ramen scene.