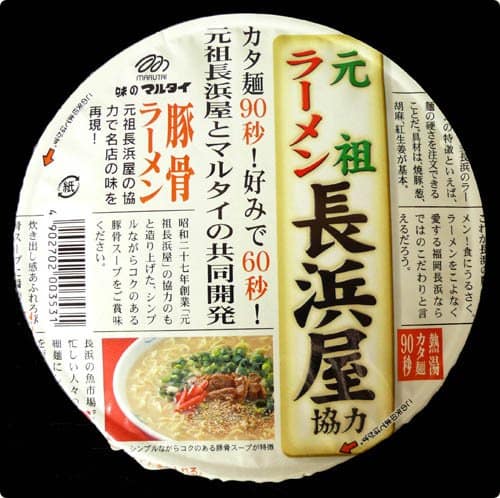 This ramen advertises that it takes only 90 seconds to make! Just imagine…if you eat this ramen every day for a year, you can save…multiply…divide…divide again…a whopping 9 hours a year! (Compared to the typical 180 seconds (3 mins) that other bowl ramen need.)

If that’s not enough to get you excited, what about the four packets of ramen accoutrements included in the bowl: there’s the obligatory soup pack, a packet of dry toppings, sesame seeds, and beni shoga. 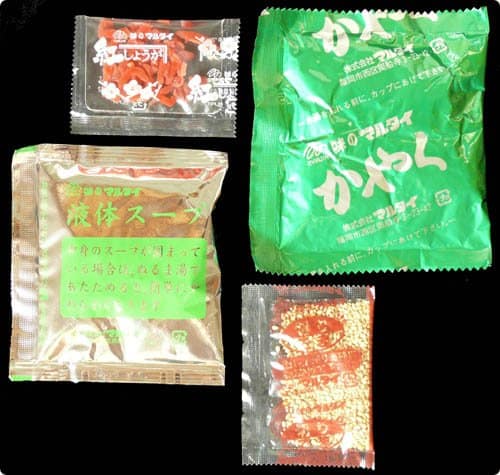 Ok, in all seriousness, a 90 second cooking time and 4 packets of accourtrements isn’t exactly newsworthy. But what this instant ramen has going for it is:
1. Its over 50 year-old pedigree. Nagahamaya is a ramenya hailing from…well, Nagahama, a region in Fukuoka, birthplace of hakata ramen. It’s been in existence since 1954, so they must be doing something right.
2. The soup. Wow, the soup! It’s thick! It’s rich! It’s bold! The soup, which is oily in the best kotteri sense, rivals actual ramenya soup. The taste of the soup is notable because no single flavor stands out. It’s like all the ingredients were blended in exact proportions to create a perfect gestalt (yes, I’m using the word “gestalt” in an instant ramen review!) of liquid pork bone goodness. And best of all: there’s not a heavy MSG taste to detract from the flavor.

The noodles were tasty. They had a good flavor that paired nicely with the soup that they readily soaked up. They had a chewy texture, but could’ve been just a little harder; for hakata ramen, and especially considering the quick 90 second bath, they were just a tad soft.

The toppings provided a solid supporting role, with the mild onions enhancing but not overpowering the flavor, and the sesame seeds adding just the right amount of nuttiness. The pork, however, didn’t stand out. I don’t think I’ve written a review yet where I can say I accidently ate some of the pork, but that gives you a hint about the size. There were maybe 3 dime-sized pieces of chashu, 3 nickel-sized, and 1 quarter-sized piece. All were overcooked and a bit tough. The flavor wasn’t bad, but it was hard to tell if they were in fact pork or if they were pieces of beef in disguise. If anything, the chashu pieces tasted like beef bacon.

This was one of the best instant tonkotsu ramen I’ve ever had, and I’m still thinking about the soup. Any Tampopo devotee knows that a good ramen soup should be good to the last drop. Ganso Nagahamaya’s tonkotsu ramen makes it easy: you’re going to want to drink every bit of the soup, then lick the styrofoam bowl. This king of tonkotsu bowl ramen gets an almost-perfect 9 out of 10.