ramen review: ramen in can 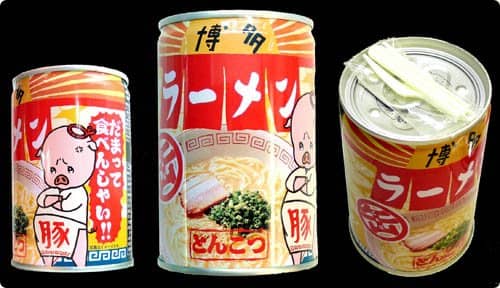 Some things are meant to be in a can, while others…maybe not so much. I’ve been looking forward to trying “ramen in a can” since I first heard about it last year, and thanks to fellow ramen blogger Keizo, who was nice enough to share his loot from his trip to Tokyo, I had my chance. (And yes, I should’ve finished writing this review months ago. I suck!)

Now, the ramen in canned ramen isn’t like the noodles you’re familiar with. Canned ramen is actually made of konjac, aka konnyaku, aka “devil’s tongue”. Konjac is a tuber and belongs to the yam family. It’s usually made into a flour or jelly for use in a variety of dishes and has a chewy texture, like a firm jello. The reason the noodles are made of konjac is to prevent them from becoming soggy. Can you imaging eating ramen noodles which have been soaking in soup for days or weeks? Mush city. 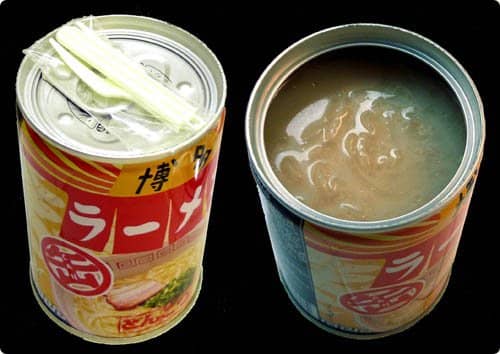 This particular canned ramen has a tonkotsu soup base, and while the picture on the can shows a nice piece of chashu with some green onions, it’s a bit misleading. There’re noodles, chashu, and soup. That’s it. But, oh, it comes with it’s own collapsible fork!

The soup reminded me of a lighter version of the kind of soup you get with nama ramen, but there’s a generic quality to it. I could almost imagine the soup being sold cold in a vending machine, next to the soda drinks and canned coffee. It’s that light.

The semi-transparent noodles, on the other hand, were dense and bland. The texture is a bit hard and rubbery, almost like…um…octopus…jelly…yeah… It’s very similar to eating Japanese fruit jelly candy in strip form, which I like, but in this setting, it wasn’t very tasty. I could feel the noodles settling in the pit of my stomach, possibly to stay for a while. But then again, konjac is supposed to be good for constipation, so maybe that’ll help. (Sorry, too much information…)

The chashu looks pretty good, doesn’t it? Don’t be fooled. The small pieces of chashu are hard and dry. They tasted like old pieces of bacon with the juices squeezed out, but at least there’s some flavor. If you pretend the chashu is jerky, you might get some enjoyment out of it.

Overall, the canned ramen is really not obviously bad, but it’s also not obviously good. I can’t really recommend it except out of curiousity, but if you’re in Japan and you come across a vending machine, give it a try and satisfy your own curiosity!

4 comments for “ramen review: ramen in can”