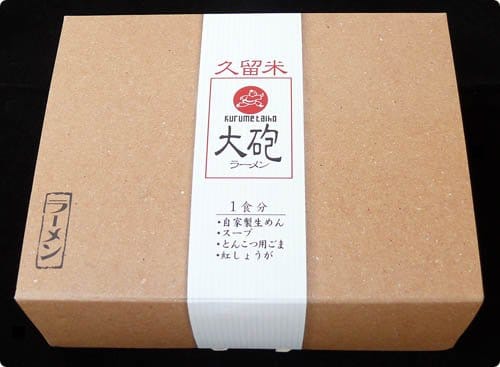 I realized after the fact that my last review was post #200. Though the majority of my earlier posts were not much more than the blogging equivalent of caveman grunts, allow me a moment to pat myself on the back for reaching a milestone, even if it took me long enough to do it.

It’s a happy coincidence that this “just-missed-being-a-milestone-post” reviews the nama version of Kurume Taiho’s tonkotsu ramen. If you’ve never heard of Kurume Taiho, know that the rameniac likens the several hours journey from Tokyo to Kurume Taiho to the ramen fan’s equivalent of a pilgrimage and Go Ramen! raved about their nama ramen’s “harmonious balance of flavor.”

I’m a sucker for good packaging, and sometimes, it’s the understated simple designs that are the most elegant. I really like the packaging of the Taiho Kurume ramen, and now, thanks to Keizo, I have the opportunity to see firsthand whether or not the quality of the ramen inside matches the gorgeous packaging outside. 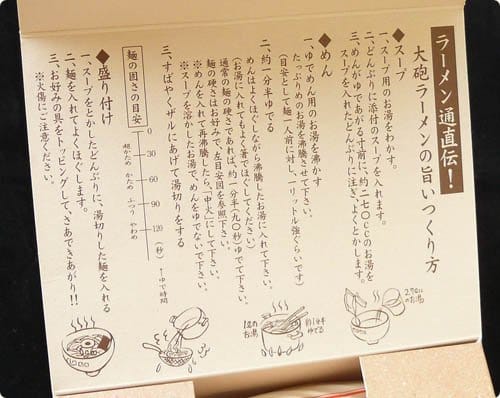 On a good day, my Japanese reading skills probably hover around a 2nd grade level, so much of the detailed instructions were lost on me. But with the help of the nostalgically whimsical drawings, and the clearly defined cooking times (30, 60, 90, or 120 seconds, depending on how hard you want the noodles to be), I was able to figure out the appropriate steps to take.

Besides the noodles and soup base, the ramen came with a packet of beni sh?ga, and an interesting looking packet of sesame seeds. While my two pots of water boiled, (one for the noodles, one for the soup) I squeezed the tonkotsu concentrate out into my bowl. The soup base may not look appealing, but it smelled like heaven: pure pork-bone essence. The water reached boiling point, and 90 seconds later (90 seconds for “normal” textured noodles), my ramen was ready.

My first slurp of soup revealed an incredibly smooth and mellow flavor. The tonkotsu soup glides down your throat but leaves behind a rich flavor that lingers. I savored the oily warmth for a moment before moving on to the noodles. The thin chewy noodles had great texture and meshed perfectly with the soup (though in retrospect, I should’ve gone for the 60-second cook time for a bit more “hardness”). Oily pork fat glistened on the soup and clung to the noodles for dear life. The coarsely ground, toasted sesame seeds added just a touch of texture to the otherwise preternaturally smooth soup, not to mention a wonderfully sweet nuttiness that was balanced, not cloying.

This was truly a wonderful nama ramen, and I have to give another bow to Go Ramen! for giving me a glimpse of instant ramen nirvana. Kurume Taiho tonkotsu ramen gets an almost perfect 9.5 out of 10.