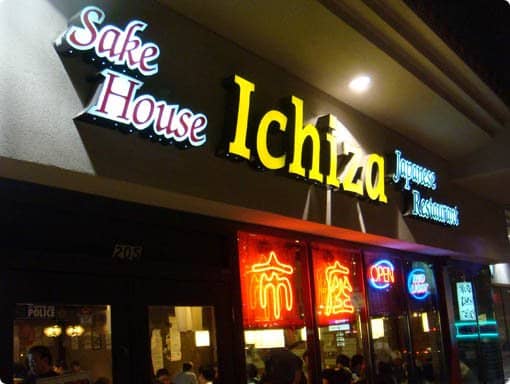 Las Vegas. Sin city. The city of glittering towers. Where every casino outdoes the last in size, opulence, and sheer luxuriousness. Where every celebrity chef worth his or her Food Network credentials race to bring you their latest and greatest twist on the future of fine dining. But what about the simple foods? What if you’re in the food for something less. Something simpler than California-Spanish-Japanese-African fusion? Something that doesn’t require a Ph.D in gastronomy to figure out? What if you just want a good bowl of ramen?

A few minutes off the shimmering Strip, on the other other side of town is Chinatown. What started out as a single, appropriately named “ChinaTown Plaza” has expanded to a 4-5 block row of Chinese, Korean, and Vietnamese shops, restaurants, and black-windowed “massage” parlors. Next to ChinaTown Plaza, upstairs from a Tea Station, is a local izakaya/sake house popular with the locals called Ichiza.

I can almost hear the collective groan. “Have you learned?” you ask. “You said, and I quote ‘Years of disappointing experiences have taught me that I shouldn’t order ramen from restaurants that aren’t ramenyas.’” Ah, but I have learned. This time, a guinea pig (thanks, Peter!) went there first, and tipped me off to this place. So on a recent trip to Las Vegas, I was eager to have a look. 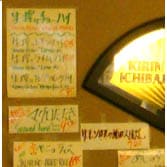 We’ll start off with the shoyu ramen, which isn’t on the main menu (and neither is the chashu ramen). Actually, a LOT of items served at Ichiza aren’t on the menu. Instead, a variety of available food items are scattered about the restaurant on strips of paper on the walls. While I applaud the authentic Japanese-izakaya feel of having to hunt for your selections, there’re just too many items. I don’t want to walk around the room, crowding the customers sitting along the walls and at the counter. And it doesn’t help that the waitress keeps pressuring me for my order. I finally ordered the shoyu ramen along with a few skewers of yakitori (good) and kushi-tan (beef tongue. and it was delicious!).

The shoyu ramen comes with the standard toppings: moyashi (bean sprouts), green onions, menma, seaweed, half a boiled egg, and of course, chashu. The soup was good, but one-dimensional. It a was a tasty shoyu soup without much complexity. The straight noodles were on the skinny side, with decent texture, but they could’ve been chewier. The egg was a plain hard-boiled egg, and the menma was soft but nicely marinated. What saved this ramen from being purely average was the chashu. The chashu was thick, flavorful, and tender. While the chashu was nowhere in the same league as that of, say, Foo Foo Tei, it was definitely above average and quite tasty.

Even though the shoyu ramen wasn’t spectacular, the other food and the lively izakaya atmosphere made me return for more. On the second night, I brought a friend as backup, so that we could, as a tag-team, try more selections. By the way, I should point out that Ichiza offers half servings of all their ramen, which is great if you want a variety of food, or if you want to have enough room for their fabled dessert: Honey Toast. More on the Honey Toast later.

This time, I ordered the Ichiza ramen DX. The “DX” version of their namesake ramen gives you half an egg, and kakuni (described on the menu as “deeply boiled diced pork belly”) as extras. The Ichiza ramen is miso-based, and comes with a mound of seaweed, assorted veggies, green onions, menma, and the aforementioned half egg and kakuni. This time, I was pleasantly surprised: this was a pretty good ramen! The miso soup was mildly spicy and flavorful. Again, the menma was soft in texture, but tastily marinated. The egg was a slight step above the one in the shoyu ramen: it was still hard-boiled (boring), but at least was slightly marinated with a mildly shoyu taste.

What was really surprising was how well the veggies meshed with the green onions and the soup. I’m not a veggie person, but I enjoyed slurping the noodles, crunching the miso-flavored veggies with every mouthful. The kakuni was also quite good. The braised pork was less fatty than the buta kakuni at Santa Ramen, but it was tender and delicious. It had a touch of sweetness from the mirin-ade (that is, the mirin marinade…get it?), but it wasn’t cloying.

The Honey Toast: Special mention has to be given to Ichiza’s Honey Toast. This seemingly simple dessert is a block (and I do mean block. The thing’s about 5 inches tall) of Japanese toast lightly drizzled with honey and topped with vanilla ice cream. There must be more to the ingredients than this, but it sure tastes good. Even ramen fanatics need to save room for this dessert!

I like izakayas and I like Ichiza. The service is a bit spotty, but the food is good to great. I finally have a place to go for a good bowl of ramen in Vegas. The decent shoyu ramen gets a bump in score from the chashu and gets a 6. The Ichiza ramen (the DX version anyway) gets a deserving 7.5 out of 10.