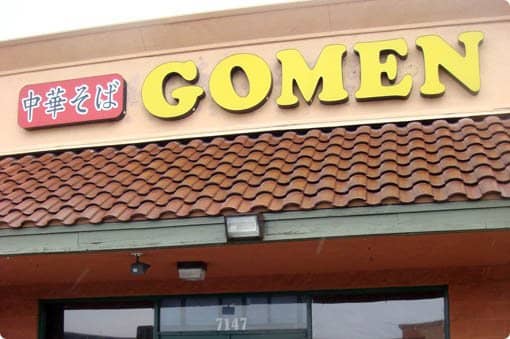 Anyone who knows even a handful of Japanese words probably knows the word “gomen,” as in “sorry.” My first attempt to eat at Gomen a few months ago resulted in one of those “gomen” moments, when, after a 30 minute drive, we discovered an empty parking lot and a “closed” sign on the door. Gomen has a reputation for having odd hours and closing at random times even when they’re supposed to be open, and I know I’m not the only one that’s experienced a “gomen” moment…”gomen” we’re not open when we say we are, “gomen” we’re closing early because we ran out of soup, “gomen” for the long wait you’ll encounter if you come during peak hours.

Yes, a name like “Gomen” practically begs for taunts and jokes after even the slightest bad experience, but listening to the touching story behind the name opens my heart to second chances and makes me forgive and forget. (I forget where I heard this story from (was it you, Keizo?) so if any part of this story is wrong, please feel free to correct me. For all I know, I made this story up in some ramen-induced delirium.) Apparently, when Gomen’s proprietor and chef was starting the restaurant, his wife was in the hospital and was not able to visit or help. As much as she wanted to be a part of his ramen dream, she could only offer a loving “gomen nasai” (I’m very sorry) every time he visited. She passed away before the ramenya opened, and he named it “Gomen” in her honor.

Since it’s been cold and raining for the past few days, the voice inside my head demanding ramen has been both incessant and loud. When my wife and I arrived at Gomen, a beam of sunlight seemed to bathe the “open” sign in a glow…or maybe it was just my hunger making me see things. The tonkotsu-shoyu ramen is supposedly based on the same broth that won the chef a TV ramen championship years ago in Japan. But tipped off by the superiority of the tonkotsu-shio, I tried that instead. Tonkotsu-shoyu ramen has grown in popularity in recent years, but the tonkotsu-shio is relatively rare, and I was eager to taste the difference.

Let’s get one thing out of the way first before we get to our main star: the chahan (fried rice) at Gomen is good. It’s flavorful, a bit oily and tasty. It’s not outstanding, and not spectacular, but it gets the job done.

The tonkotsu-shio ramen comes with minimal toppings: green onions, some very dark-looking menma, chashu, and half of a marinated hard-boiled egg. The menma was not quite as flavorful as they looked: they were definitely marinated, and some pieces had a delightful crunch, but I’ve had menma that were more packed with marinated flavor compared to these. The heavily shoyu-flavored egg was hard-boiled, and some people might find it a bit too salty.

The thin, straight noodles were toothsome at first, but softened up faster than I would’ve liked. I was slurping away as if there was no tomorrow, but by the time I was done, the noodles had lost much of their al-dente quality. However, the noodles readily absorbed the soup and combined with the green onions to form a noticeable gestalt. I was surprised at how big a role the simple green onions played in transforming the parts into a greater whole.

The chashu was plentiful, relatively thin-sliced, and delicious. I don’t usually point out the number of slices, but you get 6, count ’em 6 slices of chashu! The flavorful pork had the right ratio of fatty-to-lean meat to make the chashu just short of melt-in-your-mouth tender. The strong marinade topped off the flavor to give the chashu slices an extra-bold taste.

When I’m trying a new ramen, the first thing I usually do is sip the soup. At Gomen, I would suggest the opposite: the soup is the climax and should be saved for last. Try everything else first: slurp the noodles, munch on the menma, and enjoy the chashu. After you’ve tasted all the other parts of the ramen, then take a sip of the soup. Taste it, swallow it, take a bigger gulp. The soup has a deep, rich tonkotsu flavor with a light salty aftertaste. I was fascinated at how the saltiness stays behind and lingers for a moment after the heavier tonkotsu disappears. When I drank the soup, I had an impression of tonkotsu followed by a salt-of-the-sea chaser. I really pictured the ocean in my mind! And best of all, the soup was hot and stayed hot.

Gomen’s tonkotsu-shio ramen is excellent, and I especially recommend it to people that like bold tasting food. However, everything is heavily flavored towards the salty-shoyu side. If you’re sensitive to salty foods or prefer more delicately flavored ramen, you might not get the same enjoyment I did. Gomen has become my favorite ramenya in Orange County, and it gets an 8.5 out of 10.

One last “gomen” courtesy of my wife: “you will not be ‘gomen’ you came here.” (rimshot)