I’ve always had an instinctive aversion to “experimental” type restaurants. Over the years, I’ve managed to associate terms and phrases like “fusion,” “nouveau,” “a new take on x,” and “inspired by y cuisine” with chefs who’ve never quite managed to figure out the essential essence of the cuisine he or she is trying to replicate. But recently, the thinking part of my brain had a minor epiphany: hello, dumb-ss…ramen is a fusion food! Ramen (and gyoza!) is the Japanese take on a Chinese dish, remember? How is that not fusion? Hello!

A few days ago, Go Ramen invited me to check out Rameniac’s new find, Ramen California, with a few fellow food bloggers. “Rameniac’s been raving about it! It’s the next evolution of ramen!” Uh oh…did he say what I think he just say? Call me stodgy, but I like my ramen traditional. I have very set ideas of what a bowl of ramen should be. Give me a good bowl of shoyu or tonkotsu ramen, keep your fancy schmancy “inspired” ingredients out of my bowl, and stay off my lawn thank-yew-very-much.

But Ramen California has a pedigree. It’s not just some random ramen-ya opened by some random chef with a random dream. Ramen California stars the Shigetoshi Nakamura, a revered ramen deity in Japan. If Iron Chef ever decided to add a Iron Chef Ramen, surely Nakamura-san would be the first choice! Unfortunately, I wasn’t able to meet up with my foodie cohorts that night, but spurred on by the superlatives from two of the most respectable ramen fanatics in Southern California, my wife and I decided to ventured out of the Orange Curtain today. 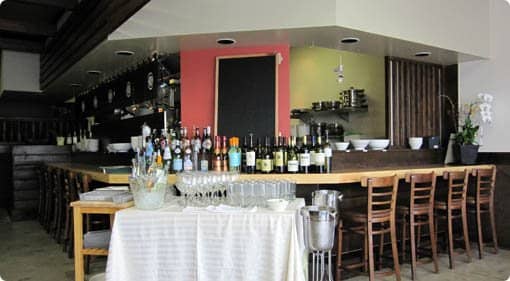 Ramen California is situated in the corner of a huge plaza, sandwiched between a dentist’s office and a Pick Up Stix, an unlikely location for a place Rameniac bills as “most groundbreaking new restaurant in America today.” During their soft opening, Ramen California is only serving ramen during lunch hours, so you won’t be able to try any of their acclaimed side dishes, but one great feature at Ramen California is that they offer a mini-sized ramen, perfect for light eaters and commitment-phobes.

Despite my wife’s insistence (“what do you mean, you don’t want to try their signature dish”), I decided to go for broke: I had my heart set on the Reggiano Cheese Tofu ramen. If I was going to buy into the whole “fusion ramen” concept, I wanted to try their most un-traditional offering. For my wife, the tomato-lover, the Heirloom Tomato ramen was an easy choice, and we decided to decide on the third choice in our little tasting menu later.

Before I move on to the ramen, I have to say something I never ever in a million years thought I would say, especially within the confines of a ramen blog: the salad dressing was in-cred-i-ble. The dressing had a lightly salty taste partnered with a very mild sesame oil, and a hint of a tangy-spicy aftertaste. Let me be clear: I am not a salad-lover: has anyone ever offered you a bowl of freshly mowed lawn? Yep, that’s my reaction to most salads. But this one…I considered keeping the plate for an occasional lick when the waitress tried to take it away.

The Heirloom Tomato ramen came out a few minutes later: the presentation was lovely, if a bit underwhelming. “Oh, it’s just soup noodles with some tomatoes and flowery bits. The soup doesn’t even look tomato-y” A sip of the soup changed our minds. “Wow…it’s so…clean and fresh tasting!” Did I mention that all the ramen at Ramen California are chicken-soup-based? There was also a dab of salty pureness to the soup, as if the chicken was one with the sea. I could just picture the chickens used in the soup base lounging on spa beds, on a raft, in the middle of the ocean…immaculately clean, with a masseuse hovering over and a manicurist at each foot. Oh yes, and the chickens need to have some basil sprinkled on them…and some other herbs I couldn’t quite pick out…and don’t forget the flowery bits, the chickens need to have a light floral scent.

But no, there wasn’t much tomato flavor in the soup itself, which was what made the ramen more amazing. The pre-dominent flavors are are chicken and herbs, with only a mild underpinning of tomato. But take in a mouthful of noodles, plop a tomato in your mouth, sip some soup at the same time, then chew. When the fresh-from-the-farm tomato squirts its juicy goodness into the mix, the effect is surprisingly smile-inducing. Is it mindblowing? No, not quite. Is it delicious? Yes, absolutely. Could I eat this every day? I’m not sure, but I’m willing to try!

And the noodles? Ramen California uses a thin, straight, springy noodle. After our first bite, my wife and I looked at each other and said “rubber band noodles!” Anyone who’s ever had a proper bowl of wonton noodles at a Cantonese restaurant will know what we’re talking about. The noodles have a very similar texture to Cantonese egg noodles, but there’s a certain…slipperiness to them that’s different. The noodles were good, and paired well with the soup. I certainly didn’t mind not having “more traditional” ramen noodles. I couldn’t wait to try the next dish!

The Reggiano Cheese Tofu ramen comes with the cheesy-tofu goodness right on the soup spoon. I usually start my ramen tasting with a sip of the soup, by itself, and mild-panic set in as I tried to decide how I was going to accomplish this with that…thing on my renge. Luckily, there was a metal spoon at the table, and I took a sip of the soup sans the cheese. Without the herbs and tomatoes, the soup was an even cleaner, purer, chicken soup than what was in the Heirloom Tomato ramen, delicious in its simplicity. After that important first step, I had to make another crucial decision: what the heck do I do with the cheese tofu? Do I let it ooze into the soup a little at a time as not to overwhelm the assari soup? Should I just dump it all in, mix it up, and place my faith in Nakamura-san’s expertise? I looked at my wife pleadingly, as if I was trying to make the most important decision of my life. She looked back, rolled her eyes, and went back to her tomato ramen. Alright then! I overturned the renge and mixed the cheese into the soup. I mixed the cheese into the noodles. I mixed the cheese into the veggies. The result was surprisingly…un-cheesy. The cheese added a richness and texture to the broth, then blends into the background, its job done. With the noodles and veggies, however, the cheese springs back out, adding a more noticeable cheesy edge to the flavor. The contrast between the hidden cheese and the crouching cheese (yes, I *did* just write that, sorry) was an interesting, and enjoyable touch.

After devouring the two small bowls, we decided we needed some meat. Both the Heirloom Tomato and Reggiano Cheese Tofu ramen come with veggies, veggies, and more veggies, but no meat. Being carnivorous by nature, the meal didn’t feel complete without some meat, so we topped off our little ramen tour with a bowl of the Grilled Chicken ramen.

I was expecting a pleasant but low-key finish to our lunch with the Grilled Chicken ramen. After all, you might say it’s just chicken soup noodles with chicken on top. What I wasn’t expecting was that it’d my favorite soup of the day. The grilled chicken itself was good, but nothing spectacular…it was simply good grilled chicken. But what the chicken slices contributed was their “grilled-ness.” The already-good chicken soup became that much richer and full-bodied with both the aroma and taste of charcoal-grilled chicken. I can say with confidence that this was the absolute best chicken soup I have ever had.

Ramen purists and foodies looking for the next new thing should head for Ramen California while the ramen master himself is still presiding over his domain as Nakamura-san is going back to Japan in a week. Keep in mind that Ramen California is still in “soft-opening” mode, and while their official lunch hours will be 11:30am to 2:30pm, they’re only opening till 1:30pm for the next few weeks. The grand opening should be happening within the next week or two, and I can’t wait to try their side dishes. I’m not going to give Ramen California a rating because of the soft opening, but I can say it was well worth the hour-drive, and I will be back!