It’s the 2010 Winter Olympics, so we’ll be reporting from Vancouver this week! First up…Benkei Ramen. Benkei Ramen is considered to be one of the top ramenyas in Vancouver, with 4 locations throughout the city, including one in “ramen central” (more on this later). That location was a bit far for me, so I went to their newly-opened Thurlow St. location.

Inside, there’s a horseshoe-shaped community table facing the kitchen, and several booths on the sides. Benkei’s interior has a nice, clean Japanese aesthetic, with soft lighting throughout the restaurant. This would be a decent place for a ramen date! ????????(That’s an obscure joke for anyone who’s watched the Dr. Slump tv series. Remember the ramen date episode? Anyhoo…) 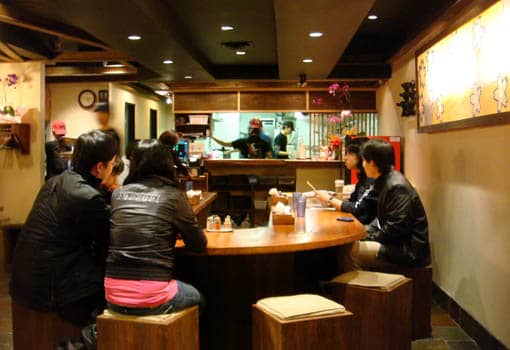 Benkei offers five styles of ramen: shoyu, shio-tonkotsu, miso, shiro-tonkotsu, and akaoni (spicy miso). I ordered the shio-tonkotsu on the waiter’s recommendation, and an order of pork gyoza (the gyoza is also available with shrimp or vegetables). From the menu: “Shio Tonkotsu Ramen contains a lot of collagen and calcium, which is a source for beautiful skin and strong bones. This Ramen is especially popular with women.” The menu also calls this a “Heavy Tonkotsu” ramen which, to me, makes it sound less appealing for anyone wanting “beautiful skin.” But then, what do I know.

One nice thing about Benkei is that their extra toppings are relatively inexpensive. Extra toppings are only 50 cents Canadian (or half a Loonie. See, I’m speaking Canadian already!) per topping, or you can opt for “everything.” “Everything” in this case is green onion, spinach, bamboo shoots, butter, nori, corn, boiled egg, kimchi, and bean sprouts. That seemed a bit much…not to mention a bit odd for a bowl of shio-tonkotsu ramen, so I opted for what looked like a hanjuku egg half. (The picture on the menu looked like a hanjuku egg, and the waiter confirmed that it was a half-boiled egg.)

The gyoza was good. That’s all. The charred skin had a slight crunch to it, and the finely minced meaty filling was heavy with a sharp onion flavor and lightly garlicky.

The ramen came out within 10 minutes, piping hot, with basic toppings: green onions, bean sprouts, menma, two slices of thin chashu, and my hanjuku egg, looking almost-but-not-quite hanjuku. I really enjoyed the crunchy tasty menma, and the chashu, while not grilled, as the picture on the menu might lead you to believe, was lean and decent. The chashu was actually just fatty enough to give it some additional flavor, so I’d still rate it as above average. I was disappointed in the egg though, since it turned out to be as hard-boiled as it looked, though it had a lightly marinated flavor. Still…I really wanted that hanjuku egg!

You could see little bits of pork fat floating in the otherwise watery-looking “heavy tonkotsu” soup. Did that sentence even make sense? Yes, the soup looked both heavy and light. As it turns out, that is a good description. The soup is full of flavor, yet not too thick. You can taste the pork and pork bone flavors, yet it’s not overwhelming. And remember, this is a shio-tonkotsu soup, but it wasn’t too salty. The sea-salt flavor lurks in the background, giving the broth a subtle salty undertone until after you’ve gulped down a spoonful. Once the soup trails down your throat, it leaves behind a distinctly pleasant swirly sea-salty aftertaste. The soup was surprisingly subtle, and I really enjoyed it.

Benkei is a place I would eat at regularly if it was nearby. It’s got a friendly “real Japanese ramenya” vibe and friendly staff shouting greetings and instructions to each other at regular intervals. They even gave me a frequent customer card: buy 10 bowls of ramen, get one free! Sure I was disappointed by the not-hanjuku egg and not-grilled chashu, but the ramen was tasty, and I noticed a distinct grilled-pork flavor taunting me every time I licked my lips after I left (where the heck did that come from?). On the technical side, it gets a half-point knocked off for the WYSINWYG (what you see is not what you get) egg and chashu (yes, I’m still going on about the egg) but makes up for it on the artistic merits of its soup. It ends up with a respectable 6.5 out of 10.

Sorry, I didn’t get their hours. If someone can report back on their hours, I’m sure everyone would appreciate it!