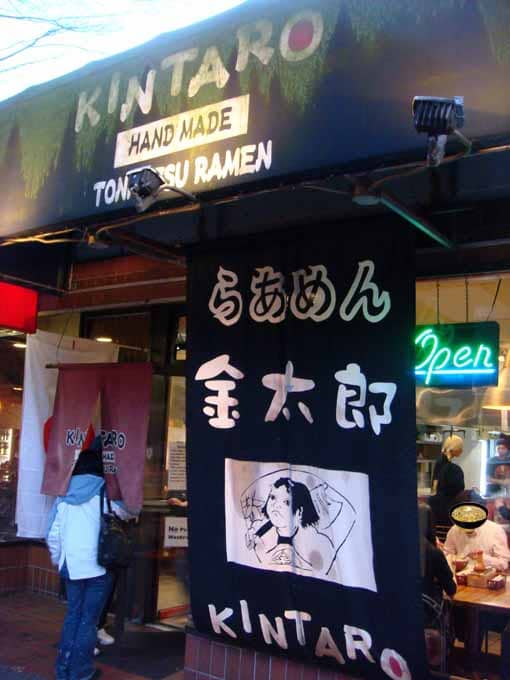 Kintaro Ramen…one of the “big three” of Vancouver’s ramen zone. Kintaro is a no-nonsense ramenya with an open kitchen. While its competitor Benkei Ramen has obviously spent some time on its interior decorating, Kintaro settles for bare, concrete walls. The ramen chefs dwell silently behind the counter, working efficiently and quietly. The waitresses clump near the back of the restaurant, also quiet, but alert, waiting to serve customers quickly. At times we almost felt a bit rushed, but given the small space and that it’s often very crowded, I can’t really blame them.

On a side note, I just want to establish my “ramen chops.” Not only did I walk for 45 mins to get here, I forced my poor wife to come with me. Then again, it was cold, and slightly uphill, but I can’t say I was barefoot, and it wasn’t snowing. 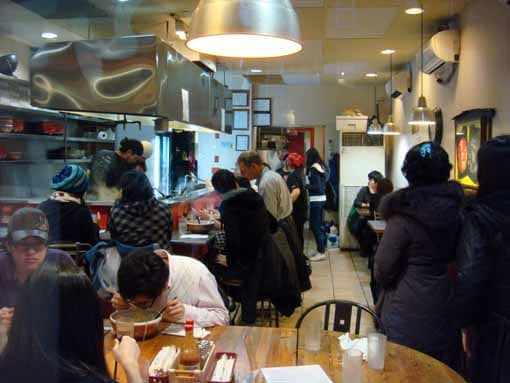 Kintaro serves tonkotsu-based ramen several ways: with shoyu, shio, miso, and cheese…cheese!? According to the menu, it’s actually a tonkotsu-miso ramen with “exquisitely balanced special miso sauce and two kinds of cheese. Ladies just lo-o-o-ve it!!” I guess Vancouver ramenya try real hard to please the ladies. As we were leaving, I saw someone (a lady, yes) with a bowl of ramen with a mound of shredded cheese on top and a slab of cheese on top of that. It looked really tempting, and it almost made me regret what I ordered, but I’m getting ahead of myself. The menu claims the tonkotsu-miso as “Kintaro’s BEST!!” but unfortunately I wanted something lighter. I decided to order the BBQ pork shio instead, thinking that it’d make a better comparison with my Benkei tonkotsu-shio experience. Having just stopped by a coffee shop to have a pastry, my wife opted to just order the gyoza. This apparently prompted a quick discussion among the waitresses on whether the $7 per person minimum needed be met by the actual per person spending (i.e. each person had to order at least $7 worth of food), or could be averaged out (e.g. a $10 dish + $4 dish = $14, divided by 2 = $7). Luckily, they let us get away with averaging it out.

By the way, Kintaro allows you to customize your order by choosing a rich, medium or light broth, and fat or lean chashu. I chose medium, and fat. The ramen came out quickly, and I let out a gasp. The chashu slices were HUGE. Each slice of chashu was easily the size and thickness of a hamburger patty. Before I get to that, though, I’ll just breeze through the toppings. The tonkotsu shio ramen comes with basic toppings: sprouts, menma, green onions, and a hard-boiled egg. Sprouts are sprouts, the menma was average and the hard-boiled egg was just a decent, lightly-marinated, very hard-boiled egg.

The sign on the outside says “hand made” tonkotsu ramen. I’m not sure if that applies to the “entire” ramen or just the noodles. I’ve read a few people say that Kintaro’s noodles are hand made. Maybe they were, but to me, they were just decent, slightly-curly egg noodles. The noodles were chewy, but could’ve been just a touch harder.

At this point, I’d like to introduce a guest reviewer. To help us review this highly acclaimed ramenya, we’ve enlisted the help of the world-famous Swedish Chef. What? You don’t know who the Swedish Chef is? Go ahead and click through that link first and read up…maybe Google a video clip or two…we’ll wait. Ok, back already? Mr. Chef…or can I call you Swedish? How would you describe the chashu?

The thick, cold Pørk! Pørk! Pørk! slices (apparently straight from the fridge) were not only huge, they were…well, fatty as hell! About a third to a half of each slice of chashu was pure fat. I guess they weren’t kidding when they let you pick “fatty” pork. Some of you might be wincing in disgust. To those people I say: Kintaro is not for you. The fatty chashu was darn tasty, and I felt a bit animalistic as I tried to wolf them down, slurping down the fat while gnawing on the lean parts.

I see…we’re back to that again, eh?

Ok…well, I’ll fill in some more details, if you don’t mind. The soup is very rich, and yes, very “pork!” There were bits of congealed pork fat floating all over the place, and this was just the “medium” broth. My wife actually asked me if there were clumps of minced radish in the soup. The broth was rich, and satisfying, but where was the salt? The salty component blended too well. It really took a back seat to the pork and pork bone flavors.

The more I drank soup, the more I thought back to Benkei’s more subtle tonkotsu-shio and the sea-salt aftertaste. This was something Kintaro was missing: subtlety. I felt like I was being clubbed over the head with pork…excuse me, Pørk!, then slapped around with Pørk!, then given more pork to wash it all down with. It was enjoyable! But I felt a bit depraved enjoying it.

Oh yeah, in all the excitement, I almost forgot the gyoza. But then again, it’s probably fitting. The gyoza wasn’t really memorable. The skin was a bit limp, and the filling was decent.

If your idea of “hog-heaven” (ugh, just put me out of my misery now) is Pørk! Pørk! Pørk! followed by more Pørk! Pørk! Pørk!, you’ll love this ramen. If reading this review and looking at the pictures makes you feel the slightest bit queasy…then you might want to try something else. Kintaro ramen was a deliciously satisfying experience, but it loses a bit by being too heavy-handed with its flavors. It gets a 7 out of 10.

Cash or Debit Card only, with a $7 minimum per person.