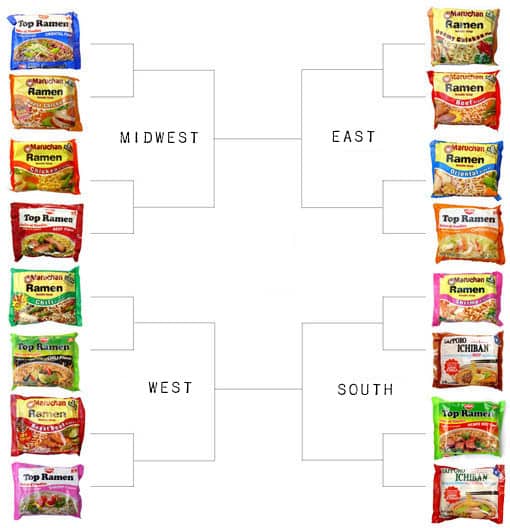 Ah, spring. Time for flowers to bloom, little birdies chirping, and brighter, longer days. Time for college basketball…and RAMEN! Prompted by the idea of saving up for a $110 bowl of ramen and the stereotype that college students and instant ramen go hand in hand (and these days, who doesn’t have the budget of a “starving college student”?), we present our very own Instant Ramen Final Four!

We have three major rivals, each with their own contenders for the championship title. Let’s meet them:

Top Ramen. The original. The innovator. Nissin Foods, maker of Top Ramen, was founded by Momofuku Ando, the inventor of instant ramen, in 1948 and introduced Top Ramen to the U.S. in 1970. They are the oldest producer of instant ramen in the world. Does this powerhouse still have what it takes to make it all the way?

Maruchan. This upstart opened their first U.S. plant in 1978 in Irvine, CA, where they’re still located. They compete head-on with Top Ramen, and in 1994, became America’s best selling instant ramen. Today, they produce 3.6 billion packages a year, enough to reach from Earth to Mars and back if you string all the noodles together. NASA, are you listening? Who needs a space elevator? We can attach satellites to strung-together instant noodles!