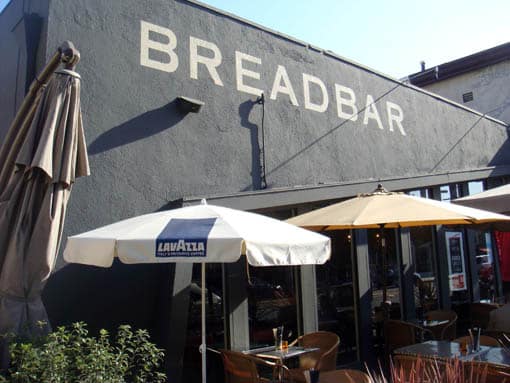 The wife and I had an hour to check out the scene, but unfortunately we weren’t very hungry. As tempting as the foie gras ramen sounded, we decided to split a spicy miso ramen and a side order of pork feet gyoza. 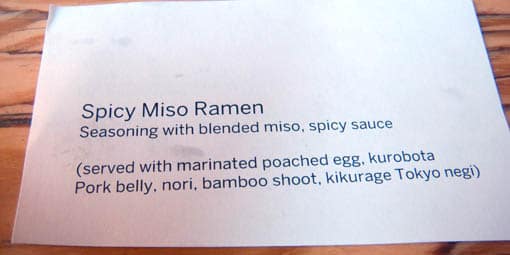 After a short wait, our food was brought out on a wooden plank. I wished the server would’ve left the plank: It really added to the presentation. The food was accompanied by paper cards describing each item. This was a fun idea, but one that slightly backfired, which I’ll get to in a bit.

We tried the gyoza first. It was tasty, mild and had a predominantly pork flavor. The texture was a mixture of minced and coarse. If a Mexican restaurant offered gourmet shredded pork gyozas, this was what they would taste like.

The ramen presentation was gorgeous. We probably spent more time taking pictures and oo-ing and aah-ing the ramen than we did actually eating it. The staff seemed amusing by our antics.

The ramen soup was tasty and spicy, but the miso flavor was on the mild side and a bit overwhelmed by the spiciness. The wife was a bit bothered by its oiliness. I had no issues with it.

The curly yellow noodles were ordinary factory-made noodles, but were cooked perfectly. When paired with the Tokyo negi (onions) and sesame seeds, it became something wonderful. I would’ve been happy with nothing more than a bowl of these noodles with the negi and sesame seeds.

All the other toppings were a mixed bag. On one hand, the kikurage (wood-eared mushrooms) and charred garlic bits added a nice depth to the bowl. On the other hand, and this is were the paper cards failed, the “marinated poached egg” was neither marinated nor poached. I really looking forward to a nice hanjuku egg. What I got was a non-marinated, tantalizingly soft hard-boiled egg. It was as if they left the eggs on the stove, forgot about it for just a minute, then decided to serve it anyway after realizing that they also forgot to marinate it.

And about halfway through the bowl I suddenly looked up and asked my wife, “did we accidentally eat the nori or something?” Yep. They forgot to put a piece of nori in the bowl. Not a big deal, but considering the place was practically empty and that they went the trouble of describing what came with the order…tsk tsk.

I also had high hopes for the kurobuta pork belly chashu. Just writing that makes my mouth water. The chashu slices looked appropriately fatty and thickly sliced, but the preparation was uneven. The chashu was well marinated, and the fatty sections were deliciously tender, but the lean halves of the chashu were overcooked and borderline hard. The taste was spot-on, but the contrasting texture was just too distracting.

Yatai Ramen Twist smacks of trendy, gourmet fare, but the execution falls short. It’s not hard to imagine that Chef Shimamura could make great ramen, if he and his crew paid just a little more time to the food prep than the food presentation. Their spicy miso ramen gets a not-bad-but-not-great 6.5 out of 10.

By the way, you can still order bread and pastries during Yatai hours. I recommend their pistachio macaron!