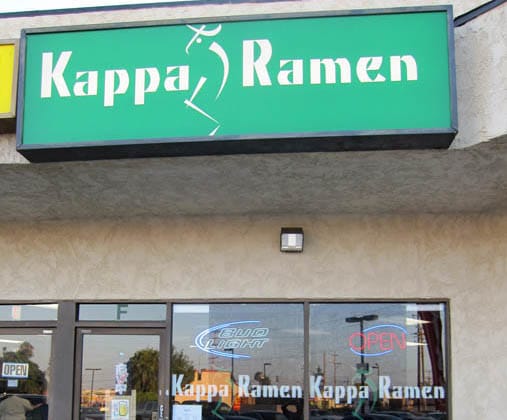 What in the world is going on? Suddenly, within the last month or two, a half dozen or so new ramenyas have opened in Southern California. Have my prayers been answered? Will ramen shops eventually outnumber Starbucks? Unlikely, but I can hope, can’t I?

Over a year ago, I found out about the existence of a ramenya in Anaheim called Lai Lai Ken. Unfortunately, I found out about it after they closed, though there was a sign indicating that a new ramenya would be “coming soon.” “Soon” finally came true! A few weeks ago, Kappa Ramen opened with little fanfare. Apparently, they’re still in a soft opening, with the grand opening set for September. Kappa Ramen is in the back corner of a run-down strip mall, located next to a tattoo parlor and comic book shop. Yes, I said comic book shop: this was one seedy plaza.

Inside, I was greeted by sparse diner-type decor behind a friendly waitress. Kappa Ramen offers several different styles of ramen, from the traditional shoyu, miso, and tonkotsu, to the more adventurous Cajun Chicken Ramen and their signature ramen, described as their “version of the California Roll a la ramen.” I wasn’t feeling adventurous, and settled on a simple bowl of “Kyoto style” tonkotsu, some gyoza, and fried rice.

The tonkotsu ramen comes with your standard red ginger, chashu, a marinated hard-boiled egg half, and green onions. The al-dente noodles were ordinary, though they paired well with the soup. And the soup was surprisingly tasty. The smooth-as-silk tonkotsu broth had depth and character, and was not at all oily. The unpretentious soup was eminently satisfying with no MSG aftertaste. The chashu was, unfortunately, the weak link. It was lean, not particularly flavorful, and we’ll leave it at that.

The gyoza and fried rice were decent. The fried rice had an interestingly egg-y and vegetable oil flavor and the gyoza had a nice crunchy skin.

Many of the recent ramen shop openings all seem to involve young owners/chefs with a ramen dream. Kappa Ramen’s young staff is turning out a solid tonkotsu ramen, and I urge ramen fans to give them a try. (Plus, for a limited time, they’re offering free shaved ice with every bowl of ramen!)